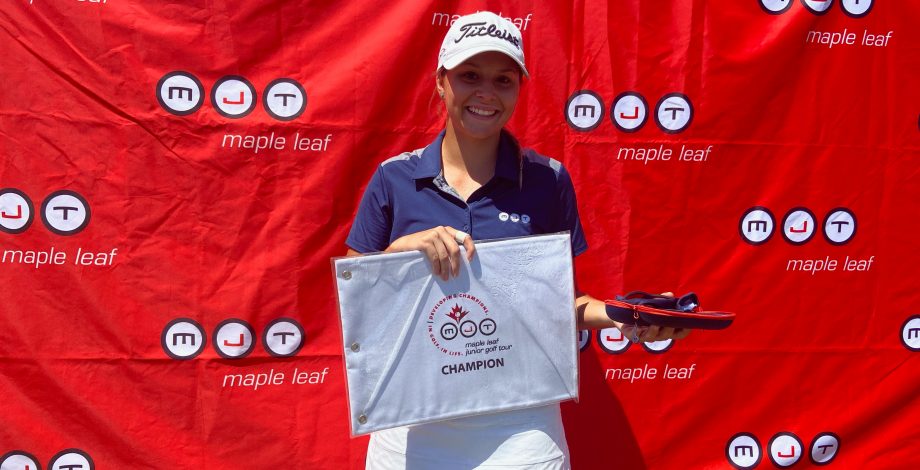 Ella Kozak is a back-to-back winner on the MJT this season. Photo-Jeff Chambers
Clark Stork

The Maple Leaf Junior Tour (MJT) was in action again this weekend in Estevan at TS&M Woodlawn Golf Club. The tournament was originally scheduled for May but was pushed back to this past Friday and Saturday due to COVID-19 concerns.

This was the second MJT event of the season on Saskatchewan soil. Last week the Tour was in Swift Current at the Elmwood Golf club.

It took a playoff, but Yorkton’s Ella Kozak (pictured above) has her second straight win of the season. Both Kozak, 15, and Autumn Neiszner of Regina tied at 154 after two rounds but Kozak won the event. Sarah Grieve was in the hunt at 157 (82, 75) to finish in third-place, three shots back.

For the second straight MJT event Chloe Wills of Kyle, Saskatchewan is the under-15 girl’s winner. Wills, 13, posted rounds of 97 and 88 to win the group by nine shots over Tayla Perry of Regina. Sarah Henderson was the third competitor in the age group, she shot 205 (105, 100) over the 36-hole tournament.

Jayden Chernoff used home course advantage to win the peewee boy’s group by three strokes over Lucas Sturgeon. Chernoff, 12, carded rounds of 86 and 74, good enough for the win. Sturgeon was three shots lower than Cole Silverson of Regina who placed third with a score of 166 (86, 80).

Warman’s Dane Giesbrecht is the bantam winner on the weekend. The 13-year-old needed a playoff to edge Elias Haukeness after they both tied at 156. Kerr Cudmore of Wawota rounded out the top-three with a two-day total score of 159 (80, 79).

Max Regier went low on day two of the tournament to win the juvenile boy’s division by a handful of shots. Regier, 15, carded a 77 on day one but rebounded with a stellar 69 in the second round. His 146 total score was five better than fellow Saskatonian Tommy Danielson. Ryan Chernoff of Estevan placed third at 157 (74, 83).

The lowest overall shooter was Theoren West of Wawota. West, 18, was steady over both rounds posting scores of 74 and 71 just good enough to hold off Saskatoon’s Jackson Wingert by a shot. Will Blake of Regina fills out the top three under-19 boys category with a 36-hole total of 149 (77, 72).

The next Saskatchewan stop on the MJT is July 26 and 27 at Moon Lake Golf & Country Club.