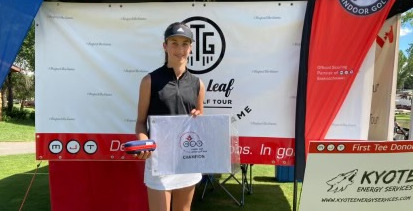 The Maple Leaf Junior Golf Tour (MJT) made its first stop of the 2021 season in Saskatchewan this past weekend. Over 100 junior golfers teed it up in six different age brackets at the Elmwood Golf Club in Swift Current.

Chloe Wills (pictured above) of Kyle, Saskatchewan was the low shooter in the under-15 girl’s category. Wills carded rounds of 85 and 91 for a two-day total of 176. She was six shots better than Niya Friesen of Swift Current. Regina’s Tayla Perry rounded out the top-three just a stroke behind Friesen at 183 (89, 94).

Yorkton’s Ella Kozak has her first win of the year on the MJT. Kozak shot 75 on day one and followed that up with an 81 on Sunday to outlast several familiar names on the Saskatchewan junior women’s golf circuit. Regina’s Autumn Neiszner was three shots back of Kozak at 159 (81, 78). Brooklin Fry placed third, she carded a 160 (76, 84). Saskatonians Sarah Grieve and Symone Ripley tied for fourth at 161.

The peewee boy’s division had the most drama on the weekend with Lucas Sturgeon and Jackson Giesbrecht going to a two-hole playoff. Both players shot 158 over 36 holes before Sturgeon claimed the victory. Regina’s Kai Kriekle, Shae Maunula of North Battleford and Estevan’s Jayden Chernoff all tied for third at 162.

Sucker River’s Dade Bernatchez has his first win in the bantam age category. Bernatchez broke 70 for the first time in his competitive rounds shooting 69 on Saturday. He followed that with a 78 in round two, good enough for a three-stroke victory. Saskatoon’s Ryan Mosher carded back-to-back 75’s to place second. Dane Giesbrecht of Warman placed third just a shot behind Mosher.

Weyburn’s Darien Herlick started his season off on the right foot winning the juvenile boys division by two. Herlick’s rounds of 70 and 78 were just enough to fend off Saskatoon’s Tommy Danielson and Max Regier who both shot 150 over 36 holes. Keaton Cote of Kindersley was fourth with rounds of 75 and 80.

Chase Pochylko of Saskatoon was the winner of the junior boys age group. He was the outright leader all weekend shooting 68 on day one and ending the tournament with a 71 for a 36-hole score of 139. Red Deer’s Cole Bergheim was second at 142 (69, 73) and Hunter Kutcher of Regina rounded out the top-three at 146 with back-to-back 73’s.

The complete results from all the age divisions can be seen here.

The MJT Mini-Tour was also in action at Elmwood this past Saturday. The complete results of their one-day tournament can be seen here.

The next stop on the Saskatchewan MJT schedule is July 2 and 3 in Estevan at TS&M Woodlawn Golf Club. This event is rescheduled from May.