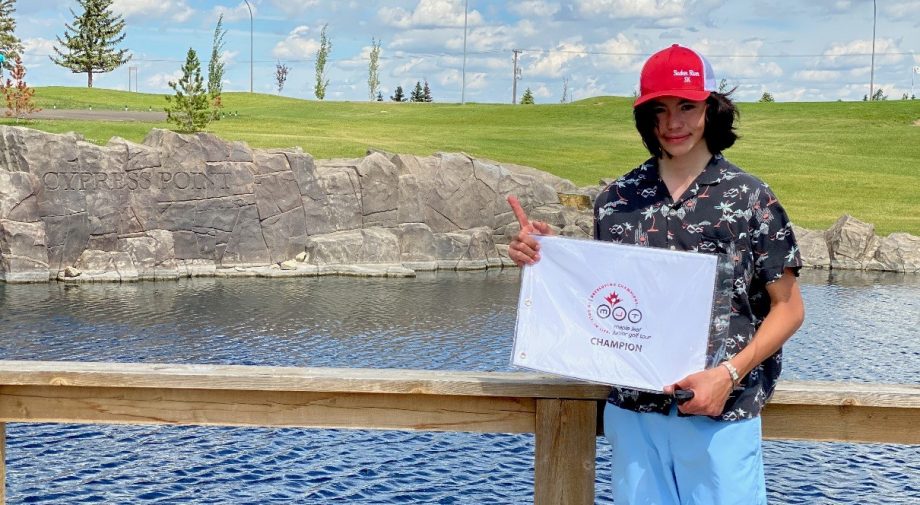 For the last 10 years anyone around Eagle Point Golf Course in La Ronge has likely seen Dade Bernatchez playing the sport he loves, now they are likely seeing his name on leaderboards and in winning circles.

Bernatchez, 14, took up the game at four years-old when his dad and “Kimosom” (Cree for grandfather) traveled into La Ronge from Sucker River, about 20 minutes north of the community. He said the difficulty of the sport was the biggest draw when he took the game up.

Bernatchez played at Eagle Point developing his game to the point he wanted to start competing around the age of 10. When he was 12, he won a Maple Leaf Junior Golf Tour (MJT) event in Warman allowing him to take part in the MJT National Championship in Florida in 2019.

Since then he has picked up a couple more victories in his age group on the MJT and started the 2021 season with a championship in his first tournament as a bantam aged player. He said the win felt great, especially with some distress along the way.

“You can’t be a good competitor if you can’t overcome adversity. On hole 12 on Sunday in Swift Current I took an eight. I could have lost the tournament right there, after that eight I just tried to get back in it. I thought I blew it but I came back and made a few birdies and overcame adversity. I am happy about my win. I need to practice and if I can stay humble I can win a lot more tournaments. I need to shoot consistently all the time,” he explained.

Bernatchez is now setting his sights on his first run at Saskatchewan provincials in Moose Jaw later in July. He has high hopes for the event and his success going forward.

“My goal is to try my best, shoot consistently, make putts, stay in the fairway, and have fun,” he added.

A large part of Bernatchez’s success can be tailored back to his association with his mentor Jerry Christiensen. Christiensen grew up in La Ronge, played collegiate and professional golf and is now one of the top professionals in the province. He holds weekly golf camps at Eagle Point with upwards of 60 kids taking part. For Bernatchez, he said seeing all the other kids trying the sport is positive.

“It’s good to see lots of kids golfing now. It feels great when I go see Jerry, he’s a pro and I like learning from him. Whatever he tells me to do I do and it really helps my game. I look up to him, and I’d love to play professional golf like him,” Bernatchez said.