Christiansen giving back to golf where it started 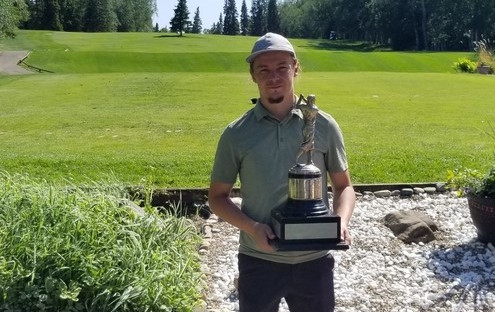 La Ronge’s Jerry Christiansen wanted to be Tiger Woods, today he is hoping to have the same impact in a different way.

The self-taught PGA of Saskatchewan member saw Woods on television when he was a kid and instantly became enamored with the 82-time PGA Tour champion. From there Christiansen became a fixture at Eagle Point Resort playing upwards of 72 holes a day. He had a solid junior career before attending the University of British Columbia as a member of their golf team. Christiansen went on to play mini tours in America and had his golf game take him to Thailand, South Africa, and Australia. He now offers weekly camps in La Ronge for juniors in hopes of providing experiences like the ones he has gotten through the sport.

“Coming from La Ronge it really opened my eyes to the world and everything else and I wouldn’t have gotten those opportunities without playing golf. I’m grateful for everything that golf gave to me. That is a big part of the reason I am doing this program,” he said.

For most junior golfers they get their start in the sport through their parents or grandparents. Christiansen’s parents did not play the game, not many did in the north when he was young. Christiansen said without a mentor or someone to look up on the course he submersed himself in reading to get better at the game.

“I read a lot of books,” he said. “That’s how I got most of my information. I didn’t get lessons or anything like that, I just read a lot of golf books when I was coming up. That’s where I learned to play the game.”

After professional stints in Elk Ridge and The Legends Golf Course in Warman this past January Christiansen decided to return home and give back to the game that has given him so much. He started a weekly junior camp on Mondays, free of charge. His goal was 25 kids, he is averaging about 60 a week. One key component for Christiansen was making sure any kid that wanted to be part of the camp could by offering the opportunity free of charge.

“I really wanted to make a point of it being accessible to absolutely anyone. In the near future I’d like to move to a point where we provide transportation as well. It really is most the most accessible program to everyone,” Christiansen explained.

He added that the camps could become more structured if kids wish to continue to develop. Christiansen said a tiered (bronze, silver, gold) structure might be possible in the future.

Each week he works with a group at a certain time providing instruction in a safe manner and then a volunteer will take the kids onto the course for nine holes while he works with another group. This continues all Monday afternoon. Now a few weeks in despite the long day and work load he admits seeing the kids faces makes it all worthwhile.

“Oh, my goodness, that’s all I really wanted to do is expose these kids to hitting that golf shot you know, the one that people hit and they are hooked. I’m just trying to get that moment for each of the kids,” he said.

Christiansen has had a strong start on the course this year to go along with giving back to the game.

He tied for third at the Scotia Wealth Open in Nipawin on June 5. Tuesday at Waskesiu Christiansen picked up his second Lobstick Open win in a row. He outlasted Phil Jonas and Shaun Dunphy winning by a pair of shots at Waskesiu.

You can hear much more from Christiansen below who spoke with Golf Saskatchewan’s Clark Stork last week. *This interview was recorded prior to the Lobstick this week.