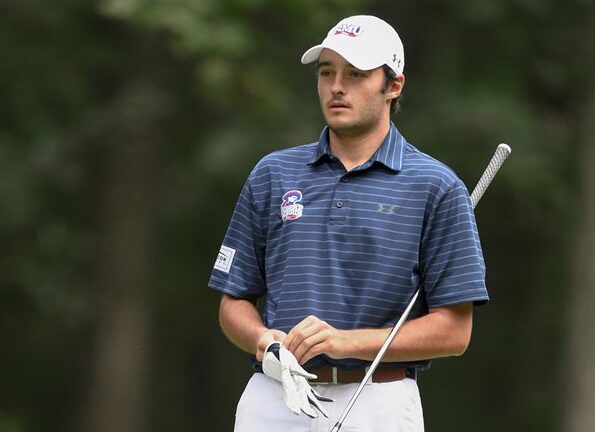 For the second time in his college career, weather may have washed out Josh Nagy‘s chance at a college win.

Last November, Nagy missed out on a potential win due to darkness halting a playoff at an event in New Jersey. This season, on April 19 and 20, the Robert Morris University (RMU) junior tied for third in the weather shortened Wright State Invitational in Springboro, Ohio. The Saskatoon product carded rounds of 72 and 73 for a 36-hole total of 3-over par, 145. Nagy tied for third, just three shots off the pace.

The Colonials tied for fourth as a team, 11 back of Wright State.

Jace Carlisle was able to celebrate a Post University team win at the Yellow Jacket Invitational in West Springfield, Massachusetts on April 18 and 19.

The Estevan product led the event at The Ledges Golf Club in par-3 scoring at 2-under par and finished tied for 27th at 14-over par, 158.

Next on the schedule is the NCAA Atlantic/East Regional from May 7 – 9 at Ravenwood Golf Club in Victor, New York.

Saskatoon’s Will Danielson had a strong showing in Braselton, Georgia competing for Milsaps College.

Teeing it up at the Chateau Élan Golf Club on April 22 to 24, Danielson went 82, 81, 76, finishing in a tie for 27th at 20-over par, 239. Danielson was just two shots off the Majors team lead, the club was seventh-place overall in the team competition.

Caden Loeppky of Saskatoon was on the course last week alongside his Waldorf University teammates. Competing in a one-round event Loeppky shot 12-over par, 84 at the Mason City Country Club in Mason City, Iowa on April 19. He placed in a tie for 41st. Waldorf was sixth in the team standings.

The Chaplin resident posted an opening round of 85 followed by a 94 in round two, the final round was the Minot State University freshman’s best carding an 84. She finished tied for 31st at 47-ver par, 263.

Several more players are competing in events this week including Nagy and Loeppky. Golf Saskatchewan will have more results later this week.