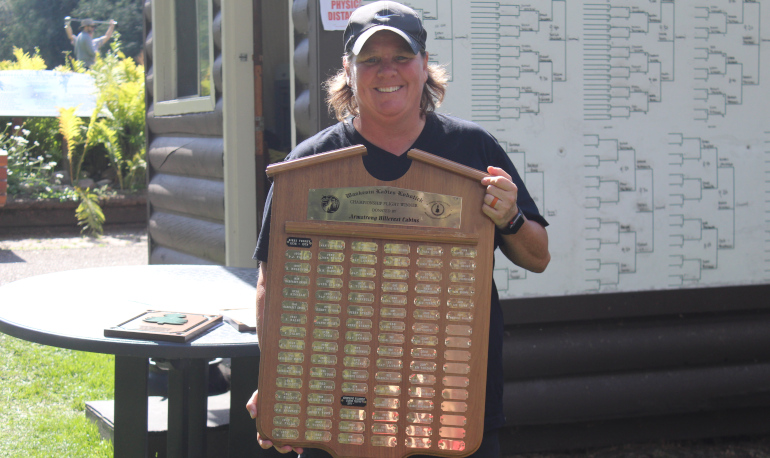 Saskatoon's Kathy Ziglo poses with the Ladies Lobstick trophy after winning the tournament for the third time on Friday. Credit - Lucas Punkari/Daily Herald

The annual Ladies Lobstick tournament at Waskesiu Golf Course is a week that Kathy Ziglo looks forward to each year.

The Saskatoon golfer added to her list of highlights at the tournament on Friday afternoon as she captured her third career title over Brooklin Fry of Shell Lake.

“All of the wins are different, especially with the match play format,” said Ziglo, who previously won the event in 2012 and 2014. “You never quite get there (to the final) the same way as you have to play each of your opponents a little differently.”

“I have far more second places than first places here, so I’ll take one of these every time that I can get them. The weather’s been great here all five days and we’re up here at Waskeisu…there’s not much you can complain about.”

Ziglo, who defeated Pauline McDougall and Abra Thompson earlier in the week, was up against a familiar foe in the final as she’s been a mentor of sorts to the 15-year-old Fry.

“I love the kid but I want to beat her,” Ziglo joked. “I let her off a bit with a few missed putts early on and she let me off a bit there at the end with some missed putts of her own, but it was still a really good match.

“I’m not sure if she’s going to end up choosing to play hockey or golf in this life, but I hope she sticks with golf. She has so much potential.”

Fry’s runner-up showing capped off a memorable summer for the youngster, who won the Golf Saskatchewan junior women’s and women’s amateur titles in July.

“I’m just trying to stay focused on one shot at a time and trying not to worry about anything else out there,” said Fry, who will be suiting up on the blueline for the Prince Albert Northern Bears this winter. “I’m just keeping focused on my game and that approach seems to work for me.

“One of my goals was to meet Kathy in the final and I was hoping to get the win, but it just didn’t turn out the way that I wanted it to.”

Friday’s final was a back and forth affair as the duo traded the lead through the first 14 holes.

After making an impressive up and down for bogey after finding the creek on her approach to the 15th green to halve the hole with Fry, Ziglo moved out in front for good on the 16th by making a par putt.

She sealed the match on the next hole after Fry missed her par attempt.

“I made a couple of good up and downs during the round and I just tried to play my game today,” Ziglo said. “I knew that Brooklin was going to be 50 or 60 yards ahead of me on her tee shots, so I was just focusing on hitting the fairways and greens.”

“I was consistent all week, but not quite in the way that I wanted to be,” added Fry, who reached the final with wins over Nancy Brooks and three-time defending champion Kim Brown, who grew up in Prince Albert and now calls Saskatoon home.

“I had a really good round yesterday (against Brown) where I felt like I played the way that I knew I could, but I just wasn’t quite as good in the other rounds this week.”

Ziglo also had a familiar face in her cart during Friday’s round as four-time Ladies Lobstick champion Brown served as her caddy.

“That was a good secret weapon to have,” Ziglo joked. “We play so much together and she knows my game really well. Kim’s a positive influence out there for me and I couldn’t have had anyone better next to me today.”

Fry wasn’t the only youngster to turn in an impressive showing this week as 14-year-old Ella Kozak of Yorkton won the championship flight consolation final over Brooks, who is from Calgary.

“The potential for Ella and Brooklin is endless,” Ziglo said. “They have great swings and they are both getting great coaching. It’s a real pleasure to watch them play.”

The complete results from Friday’s final round are listed below: