Zaba finally gets his Lobstick 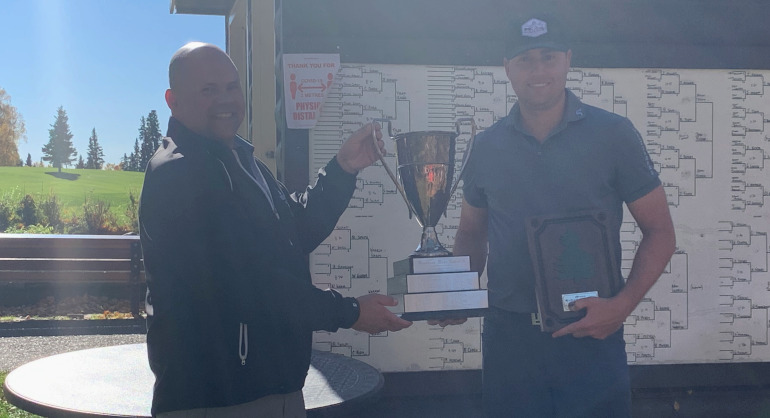 It’s taken 16 tries and some heartbreak along the way but Tyler Zaba can add his name to the legendary list of men’s Lobstick winners.

The 32-year-old Regina product defeated Brad Phelps on the 16th hole on Friday at Waskesiu Golf Course to become the 2020 champion. The Deer Valley Golf Resort member said after the round the win is very special.

Zaba defeated Kelly Timmerman, Shawn Strelau, and Jason Galon before meeting Phelps in the final match. Zaba said walking to the 16th green with a birdie putt he could picture getting the long-awaited win in the historical event.

“I knew Brad had a chance at birdie and I also had a chance and if he made it I had to make it just to stay 2-up. Luckily I had a good look at it, and I rolled in the putt for the win. Brad is a great player, a veteran player that’s been around a long time. I’ve known him awhile and played lots of golf with him. He’s a true champion as well and it was great to play a match with him today,” Zaba said.

The Lobstick is usually played in June every year with a field of around 200 players. With COVID uncertainty at the start of the season the club decided to wait it out and postponed the event until September. Zaba said the week turned out to be fantastic on all levels.

“We were worried about the weather, I heard it was windy and cool for the senior Lobstick, we were happy to come up, the weather turned out perfect. It worked out great,” he said.

Zaba was able to share the win with his family. His father is a long-time friend of golf in Saskatchewan and walked along for the 16 holes. His wife and daughter followed closely plus his son pushed his Riksha through the rolling hills of the course all having a front row seat.

“It means a lot, my kids have been coming up here since they were babies, my parents have always come up here, it’s really special, it means a lot,” he said.

You can see all the results from the qualifying round to the bracket breakdowns on the Waskesiu Golf Course website.