Young rebounds from early round jitters; finishes LPGA debut on a roll 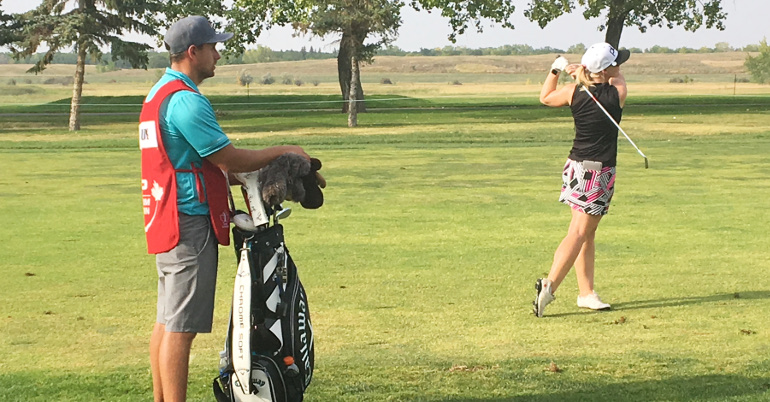 Saskatoon's Anna Young made her LPGA debut on Thursday.

Anna Young’s first round in the LPGA will be remembered as a tale of two nines.

Young, 24, teed off on the back nine holes first at the Wascana Country Club for the CP Women’s Open Thursday showing signs of nerves until the turn. Young shot 45 through the first half of her debut round but found her game on the front nine holes shooting 2-under par dropping her score to a respectable plus-6, 78. The Saskatoon product admitted the first nine holes were a struggle.

“I was a little bit nervous,” she said after the round. “Sometimes when nerves kick in you lose a little feeling and I forgot my swing thoughts. It was the first shot of the Canadian Open and right now that’s something that’s important to me is to feel my swing. I forgot it on the first one and thought, I need to remember that.”

She certainly found her game during the latter portion of the round including knocking down a trio of birdie putts in her last five holes. Young said she identified what was causing her to pile on strokes during the opening nine holes.

“It wasn’t so good at the beginning, I figured out what I was doing and came back on the back which feels pretty good. The front nine was rough so I had to do something about it,” she said.

She will have some work to do on Friday if she hopes to make the cut and play on the weekend. Young said she wasn’t aware of the rest of the 156 player’s scores instead just focusing on her own round. She tinkered with some mechanics halfway through which also brought her score back to a competitive level.

“Tempo is a big thing I work on, especially in tournaments. That is what I was focused on, but I realized that my tempo was quick, but it was a shorter swing. I was leaving the face open and as soon as I realized that everything went better,” she said.

She won’t have much time to rehash her first 18 holes, Young will tee off in the first group Friday at 7 a.m. along with fellow Canadian Brittany Marchand and Daniela Iacobelli.