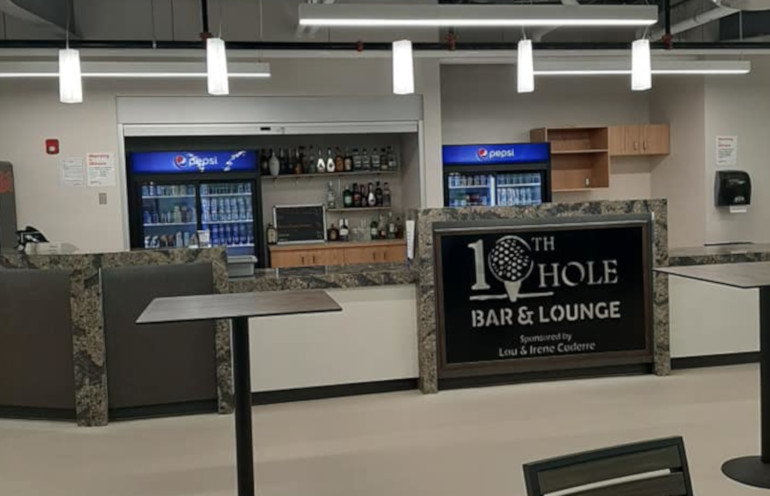 The Wynyard Golf Course has a new clubhouse.

The excitement level in Wynyard these days is at an elevated rate.

The town recently cut the ribbon to celebrate the grand opening of their new multi-purpose sports facility plus a fundraiser for the golf course is becoming the talk of the east-central Saskatchewan community.

The $11.4 million facility is home to the town’s new arena as well as the clubhouse for the Wynyard Golf Club. Director of Leisure Services Sigourney Hoytfox said the buzz around the community is evident.

“Everyone is really excited,” she said. “We just started our arena season, so we haven’t actually had a chance to use the facility for anything golf related but I think everyone is excited and looking forward to it.”

The former clubhouse, that officially closed a couple weeks ago was previously an old school house. Hoytfox said it was outdated and needed to be replaced. The new Co-operative place features a full-service kitchen, lounge, and change rooms. She said putting the clubhouse into the building will put the Wynayrd Golf Club near the top of courses in Saskatchewan.

“We are so lucky to have the course we do. The caretakers and greenskeepers that look after the course are very talented and passionate about what they do. That’s the heart of what makes our course so great,” Hoytfox said.

The golf club is currently holding a chase the ace fundraising campaign that’s bringing in thousands of dollars for the club and soon someone will win a handsome pot. The weekly drawing of cards takes place on Tuesday, this week the nightly pot was over $1,300, the person who draws the ace will take home, as of print time an estimated $25,000. The group is down to about 10 cards. Hoytfox said the funds raised will go into planned projects for the course.

“We’re possibly moving the practice green, right now it’s by the old clubhouse and the new facility isn’t in the same spot,” she explained. “It’s nice to have it by the facility, so there’s that cost we’re looking at. There’s a couple greens we’d like to replace as well as a second-floor deck on the facility overlooking the course.”

The former clubhouse was playing host to the weekly chase the ace draw, but it’s been held at the new facility for the last couple weeks. That has allowed the public to visit the facility, enjoy the menu and socialize. Hoytfox said someone is going to be happy with a big win but overall the golf club is the big winner.

“It’s so much support for our golf course,” she said. “Obviously people are buying because they want to win but, think about all that money going back into the course.”

Tickets are available at the facility as well as Golden Scissors and at Wynyard Pharmacy. You can also purchase them online here.

Wynyard Minor Baseball will also use the facility in the summer months. Hoytfox said the town has worked extremely hard to have the initiative come to fruition and everyone is going to benefit.

“There’s not a separate space in the building for golf or for our arena, it’s all mingled together. If you are upstairs you will see golf, hockey, or ball photos. Same as downstairs, we will have a golf, hockey, and ball feel down there too,” she concluded.