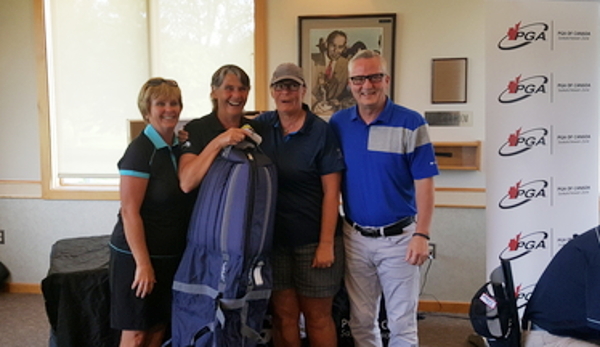 PGA Saskatchewan held their Pro Lady tournament in Saskatoon June 4 with 23 teams from across the province taking part.

The foursome of professional Shawn Woods, along with Donna Coffey, Bev Grimes, and Barb Swanson took top spot shooting a 12-under-par in the two net best ball format event at the Saskatoon Golf and Country Club. Scott Knapp, Judy Giblett, Carol Michel, and Mamin Lee-Sing finished in second place, the team of Ryan Wells, Donna Dyck, Deb Thieman, and Dawn Macauley were four strokes back in third. You can see a complete list of the results here.

Woods tied with Dean Brown (pictured below) for the low score among professionals at one over par each shooting 73.

The tournament has been played for over three decades but was resurrected a couple years ago with new sponsorship. Sun Mountain Sports came on board as title sponsor, Woods is the Saskatchewan representative for the company.

The PGA of Saskatchewan holds a men’s and junior pro-am event each year too. The men’s tournament is in North Battleford on June 18.