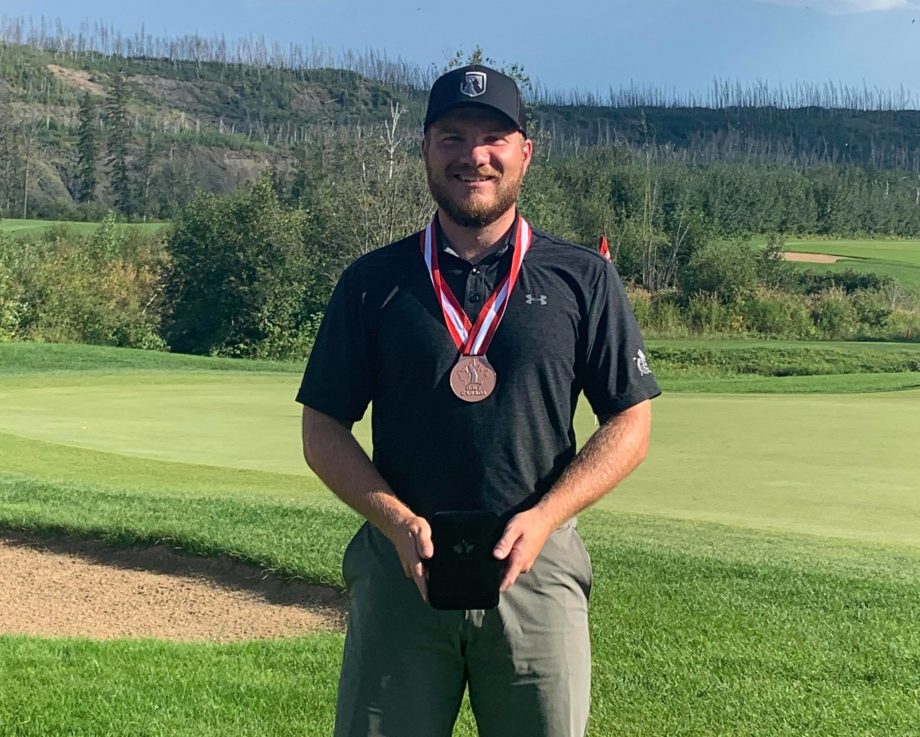 Justin Wood admitted he didn’t know what was in store for him at his first Canadian Mid-Amateur Championship that occurred Aug. 24 – 27 in Fort McMurray, Alberta.

The former Unity resident, who now resides in Saskatoon said he made good decisions all week at the Fort McMurray Golf Club, and it paid off with the highest finish for a Saskatchewan player at the event since Tyler Wright was fifth in 2017. Wood never shot higher than two-over par in four rounds and secured a bronze medal for his efforts.

“I didn’t really have much of an expectation, good or bad,” he told Golf Saskatchewan this week. “I was just going to see what the course was like and see what happened. I’ve been hot and cold all summer, going into a couple tournaments where I was feeling like I was playing pretty good I didn’t play very well and then ones I was going in playing bad I played pretty well. I thought I would just go into my first mid-am and have some fun.”

His approach worked well, the 26-year-old finished at five-over, 293 (72, 73, 74, 74). He tied Alberta golfer Matt Williams for third. The winner, Charles Fitzsimmons won the championship at just one-under par. Wood said he kept the golf ball in play and never really got into trouble at the treelined course.

“I played really smart out there, I didn’t take any unnecessary risks for myself. I hit a lot of iron shots into the middle part of the greens or into the fat part of the greens and just tried to par the course to death. I knew the tough pins; I did a really good job of using the pin sheets and just knowing where to leave it. I didn’t make as many birdies as I needed to win but I definitely kept most of the big numbers and a lot of bogeys off the card,” Wood said.

He said the response from the Saskatchewan golf community has been fantastic, including his hometown of Unity and in Saskatoon. Now that he can look back on the accomplishment Wood said he’s proud of his performance and hopes to make a run again in the future.

“I appreciate it a bit more now that I can relax and don’t have to hit anymore shots,” he laughed. “It was a fun four days. I really think too much about where I was at in the tournament, I just tried to treat it like I was playing at the Sask. am, like I belonged in the final group. I was pretty nervous on the first couple holes in the third and fourth rounds being in the final group but after that I was pleasantly surprised with how comfortable I was in that position. Hopefully that leads to some more of that kind of stuff in the future. That would be awesome,” he concluded.

More from Wood below:

Another Western Saskatchewan born player saw his name near the contenders at the championship in Fort McMurray. Kindersley’s Kyle Wiebe shot 12-over par, 300 at the event and placed solo in 12th overall.

“Going into Fort McMurray I was feeling alright with my game and then you get there and play a practice round and you see how tough it is, you are thinking this will be a true test of golf,” Wiebe said. “Luckily I was able to keep it together for the most part other than about five or six bad swings. It was a fun week.”

Wiebe opened with a solid 74, lost a little traction in the middle two rounds shooting 78 and 77 but he rebounded fantastically on the final day with a 71, one of just five players in the field under par in the last round.

“The last day, it came together on the range, I was like okay, we’re finally loose, feeling good to go. Mentally I was right into it for a final round performance, and I made it happen,” he explained.

Over the last few years Wiebe has climbed the amateur ranks in Saskatchewan, going from 47th at the 2018 amateur championship all the way to a fourth-place finish in 2020. He said his showing in his first Canadian Mid-Amateur Championship last week gives him confidence to compete with the best Saskatchewan and the nation has to offer.

More from Wiebe below:

Among the 13 Saskatchewan players making the cut in Fort McMurray was Michael Smith from Saskatoon. A self-proclaimed late bloomer Smith has only been competing a few years. He said to make the Saskatchewan team this year and perform well at nationals was extremely satisfying.

“I went from, to be honest in my late 20’s I was a 10 handicap and then I started going to Clinton (Schmaltz) at The Willows and really worked hard on my game. I’d have never expected to make the team this quickly, its good. It is definitely a confidence booster,” he explained.

Smith started the event with an 87 and never predicted he’d be around for the final two rounds, however a 77 on day two kept him in the field after the cut. He finished with a 76 and 78 to conclude the championship at 30-over par, 318. He was 51st.

“Fort McMurray is one of those courses where a guy from Sask. doesn’t have a lot of reps in terms of difficulty of the course and the pressure of playing an event like that. I hope to do well but it doesn’t always pan out that way,” he said.

He feels that with more experience (this is his second national event) he can compete in these tournaments and not just make cuts.

“It kind of motivates me to get better and just keep working on my game and hopefully eventually I can start contending in events like this,” Smith added.

More from Smith below:

For Birch Hills golfer, Jeff Whitfield, his first national appearance was also a very positive and eye-opening experience. He said Golf Canada made the event very welcoming and he enjoyed his time in northern Alberta.

“It was good, it was very good,” he said. “This was the first time I’ve been to a Canadian event, so it was well worth going. I didn’t play as well as I wanted to but it was a very good experience. It was well put on and all the other guys from Saskatchewan were really great guys to go with.”

Whitfield opened with a 77 before shooting 88, 86, 83 for a four-day total of 334. He said the Fort McMurray Golf Club had a layout not many Saskatchewan courses can emulate so making the cut was a goal he attained.

“You definitely want to make the cut, you don’t want to make it on the number, especially when the number is 21,” he joked. “The goal was to make the cut for sure and do as well as you can, it was tough. Coming from the prairie courses, Elk Ridge is probably the closest to that you’d see for tree lines. It was incredibly frustrating at times, but everybody had to play the same course. It was a good test.”

Like all the competitors, the response back in Saskatchewan was positive on their performances which included 13 of 16 players playing all four rounds. Whitfield reiterated the fact his home course was very proud of his representation at the championship.

“For sure, everybody was throwing congratulations that I talked to. I haven’t made it to a men’s night, I’m sure my score will come up. Its good. Everybody else sems to be from the big fancy clubs but there are some really great nine-hole tracks in Saskatchewan that get left out and Birch Hills is one of them,” Whitfield added.

More from Whitfield below: