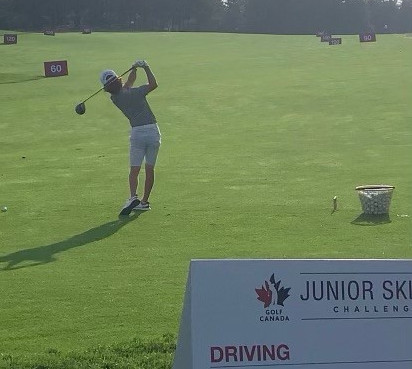 Jackson Wingert was in Toronto for the national Junior Skills Challenge in late August.
Clark Stork

Saskatoon’s Jackson Wingert is currently assisting in friend Alex Swinnerton’s success at the Elk Ridge Open as his caddy but in late August it was the Willows Golf and Country Club junior enjoying an experience on the course.

Wingert took part in the 12th Junior Skills Challenge National Event at TPC Toronto at Osprey Valley in Caledon, Ontario. Junior players from across Canada converged on the course to compete in putting, chipping, and driving competitions. Wingert said the event consisted of a two-player fun event on the first day, that unfortunately was rained out. On the day of the competition, he feels it went well leading him to a second-place finish in the boys 15 – 18 age group.

“It was pretty good, it could have been a lot better,” Wingert said. “I did well on the chipping, the driver wasn’t very good, and I lipped out every putt.”

He added that despite the skills challenge not being an actual round of golf the experience was similar in that every shot counts in a competition.

“You have to make sure every shot is good. We only got three shots in each event so you can’t make any mistakes, just like a tournament,” he explained.

Wingert has been a part of the Western Canada Summer Games team and enjoyed other golf experiences with potentially many more to come. He said taking in the event and playing a round at Osprey Valley was something special.

“It was really cool, just to go down there. All three of their courses down there, unbelievable how nice it is,” Wingert said.

He was able to qualify for the national event through a regional competition held in 2019 at Wildwood Golf Course in Saskatoon. Golf Saskatchewan is hosting a challenge on Saturday, Sept. 18 at The Willows. Wingert said the experience is positive and juniors of all skill levels are welcome.

“It’s just a really good, fun experience. It doesn’t matter if you win, it’s just different than actually playing in a round, I really enjoyed the local one and especially the one in Toronto,” he said.

As part of the agenda in Toronto, Team Canada coach Derek Ingram worked with the competitors for an hour on the driving range.