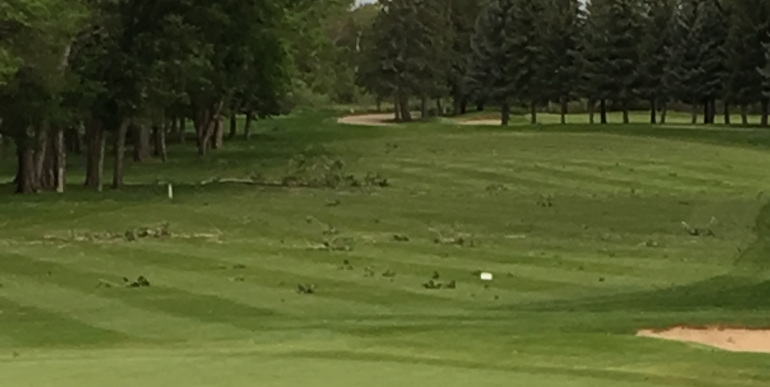 After 54 holes of the Saskatchewan Amateur and Mid-Amateur Championships at the Saskatoon Golf and Country Club it was Mother Nature doing the driving late Thursday afternoon.

With Danny Klughart and Jehremy Ryde walking towards their balls on the 18th fairway to decide a winner of both events a plow wind battered the course sending the players to the clubhouse in a panic. Ryde said he thought they had time to finish the hole as the weather moved in.

“It wasn’t in my mind to hurry,” Ryde said. “I saw the TaylorMade flag by the green whipping, I yelled at my caddy to not go anywhere near the trees and let’s get out of here.”

On the leaderboard Ryde was up a stroke on Sean Mills and Shaun Dunphy at the start of the day, Dunphy and Mills both shot three-over, 75 to drop to a tie for sixth. Klughart shot the lowest round of the tournament on Thursday with a 66 to jump seven spots and force the playoff. Ryde said he couldn’t get a putt to fall down the stretch.

“I couldn’t get one to go, I had a couple five to seven footers that I couldn’t get to go down. I had a good putt on 18 that I just missed on the high side. I will come hit some putts in the morning and see what happens.”

Klughart was striding towards his ball when he saw the branches and trees starting to fly across the fairway.

The Cooke Municipal Golf Club member started the week slow with an opening round 74 but found his game the last two days going nine-strokes under par. He said his play has picked up over the last couple days.

Meanwhile, Roman Timmerman and Justin Wood were set to putt to decide the third-place finisher in the amateur event. They left their balls marked and headed for cover.

The playoffs were suspended by the referee committee, the four players will pick up where they left off at 8 a.m. Friday.

The national teams and quota spots for the national amateur and mid-amateur championships will be finalized as well on Friday. To see all the results click here.