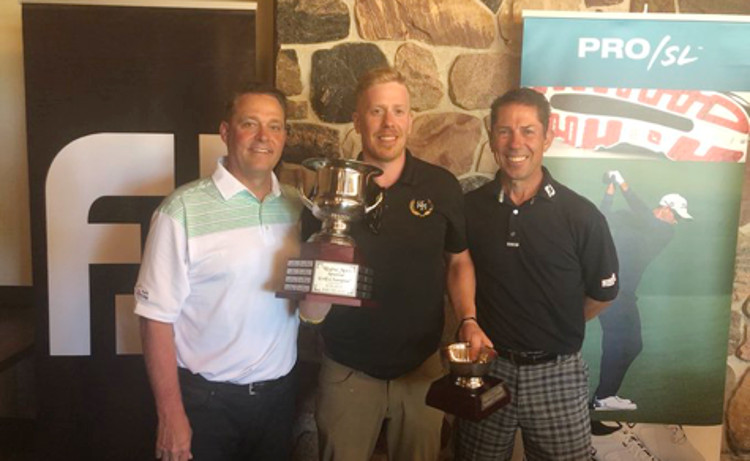 Despite not having time to play consistently so far this season the Regina product fired 141 over 36 holes on the weekend to claim the championship. Just days from celebrating the one-year anniversary of his business in the Queen City, White said his work schedule has kept him to just one full round of golf so far this season. That didn’t affect the 30-year-old’s performance at the Royal Regina Golf Club (RRGC) and Wascana Country Club (WCC) on route to a one-shot victory over Saskatoon’s Landon Emberley. White said even he was a little shocked by the result following a slow start to the season.

“Kind of but at the same time I have been putting a lot work into my game since I opened this business. We have a Trackman in there, so I’ve been doing a lot of work getting my swing in tune,” he said. “I’ve been playing golf my entire life so if you understand to manage the misses, be confident, and have fun things can work out every now and again.”

White produced just seven bogeys over 36 holes, comparatively he knocked down nine birdies. Regina’s Ryan McNall had a one-stroke lead after day one at the RRGC. The second round was hosted at White’s home course, he was optimistic heading into the final 18 holes.

“I was comfortable and confident, I know it was early in the year and the wind would be blowing. I just stayed to my game, I figured if I could post under par I could win. It was really good,” he said.

White owns 1621, a health club style facility in Regina with a focus on golf. The one-year anniversary of the business in June 1. White said the success and hours taken up by the business will keep him from entering some tournaments. He is the defending Publinx champion and wants to defend that title, he said he likely won’t get a chance to compete in the Men’s Amateur at Dakota Dunes later this year. He did say the talent level of the golfers in the province and Regina is elevating and that’s positive.

“I shot under par the second day, Ryan (McNall) shot under par the first day, there was bunch of scores around par. It just goes to show the quality of golf around Saskatchewan. We have a lot of good players and that is great to see,” he said.

White earns 500 Order of Merit points giving him an early lead in the season standings.

Special thanks to Randy Gilewich and the Regina Dental Group for sponsoring the event.