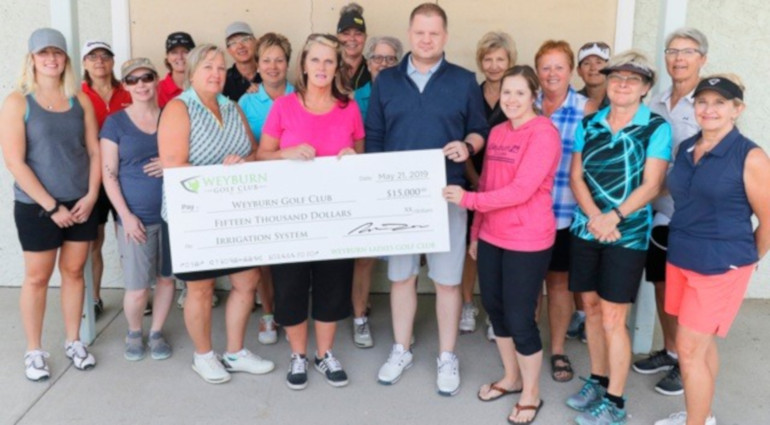 The Weyburn Golf Course’s (WGC) Ladies Club has teed off on a fundraising campaign for a new irrigation system for the facility.

The club recently contributed $15,000 back to the Weyburn course that is part of a fundraising campaign with a goal of almost $1 million that will revamp their watering system. Ladies Club President Andrea Corrigan said the group has put funds into other large expenditures, but the irrigation system needs help.

“We put new carpet in the clubhouse, we bought new tables and chairs, big ticket items,” she said. “We have nearly $20,000 in our bank account and we are always buying a dishwasher or flowers, but what can we do to help this course out? Well they need a million-dollar irrigation system, let’s start with that.”

The ladies Club has hosted a very popular tournament every year since 2000 that has raised substantial funds. The group also has their weekly league with skins and 50-50 draws to build up their account. Corrigan said the amounts add up.

The Weyburn Golf Club is celebrating their 100th anniversary this summer. They hosted a par three tournament on May 11 to help kick off the season. The club is holding their Legacy tournament on July 13 with all funds going towards the irrigation system and inducting two lifetime members to the course.

The WGC is also home to PGA Tour professional Graham DeLaet. Fixing the irrigation system and preserving the course is important to Corrigan for the community’s sake and DeLaet’s legacy.

“We’re very proud of Graham, anywhere we go we hear it. My husband and I have been to the President’s Cup when Graham was playing in it,” she said. “We’re very proud to be not only Canadian but that Graham is part of the Weyburn Golf Club, that’s where it started for him. It doesn’t matter where you live, we all need help and it starts with groups like us.”

Corrigan is a long-time board member with the WGC and said years ago they priced an irrigation system, at that time about ten years ago it was $425,000. The cost has since doubled, she said the time to rebuild the infrastructure is now and the city will benefit.

“We’re the skating rink of the summer, they don’t understand that and it’s tough sometimes, but we need to get this done.”

The course now has a fundraising thermometer displayed in the clubhouse tracking their goal.