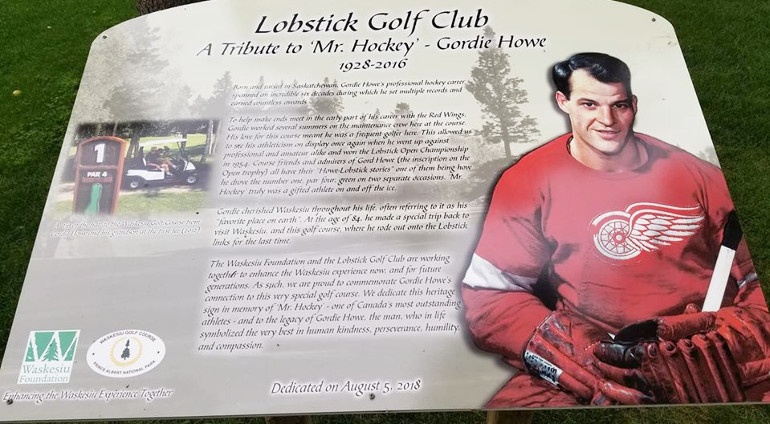 The community of Waskesiu and the storied golf course recently honoured Gordie Howe and his history in the region.

The Waskesiu Foundation triggered the idea of honouring Mr. Hockey following the release of Dr. Murray Howe’s book; Nine Lessons I learned from My Father. A portion of the book illustrates Howe’s time in Waskesiu growing up and as a National Hockey League star. A pair of dedications took place around Waskesiu during the weekend of Aug. 3 and 4 including a dedication at the golf course. Manager Tyler Baker said the Waskesiu Foundation reached out to them citing Howe’s connection to the course.

“They approached us to be part of it because in 1954 he won the Lobstick Open,” Baker told Golf Saskatchewan. “He played a lot of golf here, he was a past staff member, so we said, for sure we will jump on board and be part of the festivities.”

Dr. Howe signed copies of his book during the celebration that was attended by several hundred people through out the weekend. Howe’s 93-year-old sister Vi was in attendance as well. Baker said learning more of Howe’s history in the area was neat to witness.

“It was a good experience, it was amazing to see so many kids around to learn that part of history with a legendary hockey player,” he said.

Several stories were shared regarding Howe’s days on the course including the Floral, Sask. product driving both the first and eighth greens on several occasions. He was also seen on the lake routinely fishing with Toronto Maple Leaf’s legend Johnny Bower.

The course erected a sign near the clubhouse entrance (pictured above) with a photo of Howe in his famous number nine Detroit Red Wings jersey, a picture of him with his grandson, and an article with a brief history of the Hall of Famer who passed away in 2016. Baker said visitors enjoy taking time to read the sign and chat about Howe.

“Seeing the amount people stop and look, the sign has the Lobstick tree in the background, it really catches your eye right away. They read the little article and say oh, I didn’t know that. It’s definitely creates a lot of chatter,” Baker said.