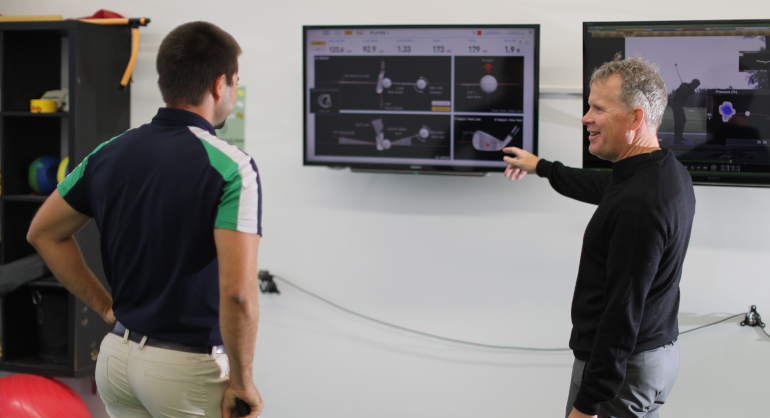 Cory Kartusch (right) collected his eighth PGA of Manitoba award this past week.

Collecting honours is nothing new for the former Regina resident, according to his biography on the St. Charles website, Kartusch is an eight-time winner including Teacher of the Year (2010, 2013), Professional of the Year (2005, 2014), and Merchandiser of the Year (2004, 2008, 2009). He’s been the head pro in Winnipeg since 2003. His playing career began at the Wascana Country Club in his mid-teens, but without the assistance of Graham Coulter, golf could have ended as quickly as it started.

“Graham saw me, gave me a lesson,” Kartusch explained to Golf Saskatchewan. “Said meet you next week, I met him the next week, we kept going. What spawned from that was a group of us meeting Sunday mornings for lessons from Graham. The great part of that, well the great part for me and not him was that he never charged me. I will never forget that, ever. That would be my story on the catalyst that got me going.”

Kartusch began working at the Wascana when he was 16 years old. He attended business school in Lethbridge through their golf program which assisted in him having a long career in the industry. He said post secondary education was helpful, but he pointed back to Coulter for his career.

“I knew I loved being at the golf course, I really enjoyed watching Graham’s passion about the club and about how he embraced owning the business and how much passion he had towards making that work indirectly through servicing the members. The loyalty came back to the proshop and I always wanted to be in my own business and at the time logic told me combining golf and the opportunity to be a proshop owner was the right thing for me,” Kartusch said.

Kartusch left Regina for Ottawa and spent a year at the Carlton Golf and Yacht Club where he worked under another Graham. Graham Gunn took Kartusch under his wing and pushed him to work hard within the industry.

“He really lit the fire under my butt in terms of hey, if you want to be successful long term at this game you better know how to make people better,” he said. “To this day we talk on the phone weekly about golf swings and teaching and how we’re doing, it’s phenomenal. I was only in Ottawa for a year, but it was extremely impactful.”

Wanting to be closer to home, Kartusch and his family moved west to Winnipeg. Since his arrival in the Manitoba capital yearly honours have followed including this year’s Professional Development honour. He said the awards he has collected over his career are proud moments but in 2005 when he won the PGA of Canada Professional of the Year, that was a monumental honour.

“They are all great moments, but it was quite surprising to win Canadian club professional of the year, to win that national award which they deem the highest honour a golf professional can achieve, which I’m not so sure of personally but it really blew me away. It was quite the honour and I will always cherish that,” Kartusch said.

Kartusch has taught many junior golfers and amateurs during his career. Several have gone on to NCAA collegiate careers, he’s also coached three Manitoba champions. He said teaching and giving back to the game are important to be successful, he added having a passion might be the most crucial ingredient for a long career.

“If you are looking to get into the golf business you need to make sure it’s a true passion of yours and you have a true vision of what you are getting into,” he said. “The second thing I’d say is you cannot stop learning and educating yourself, there’s no end to it. The moment you end that is the moment your career may start to move a little bit backwards and you will wonder why.”

An accomplished player himself, Kartusch has several professional wins and he holds the course record of 63 at Regina’s Tor Hill Golf Course, he did that in 1998.