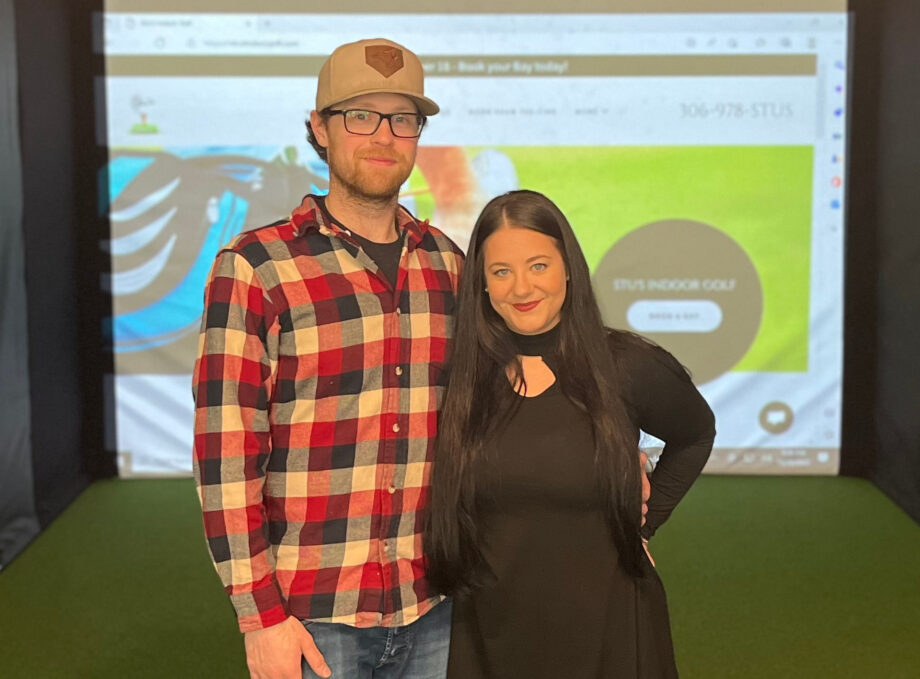 Justin and Amanda Stupak are the owners of Stu's Indoor Golf in Warman.
Clark Stork

With a young family including three boys the Stupak family is hoping an indoor golf facility will grow golf and play a role in more recreational family-friendly options for Warman, Martensville, and the area.

Amanda and Justin Stupak are originally from Yorkton, the couple then relocated to Saskatoon for about a decade and now they call Warman home. After two years in the fastest growing city in Saskatchewan they have opened Stu’s Indoor Golf. Being a mother of three energetic kids Amanda said they wanted to open a facility that promotes an active lifestyle through golf and sports.

“That was a big reason why we wanted to open something leaning to the sports area and going towards recreation too then just trying to help the community build something within the community,” she told Golf Saskatchewan during a visit to the business on Central St.

Amanda was a competitive cheerleader growing up while Justin played baseball, hockey, and golf during his youth. The couple feels sports and recreation provided them with opportunities in their youth and wanted to pass that along in their city and region as well that they compare to their hometown of Yorkton.

“There is lots of families here with young kids,” she said. “We’re really hoping to grow on that and start targeting a younger generation for golf.”

Stu’s features four golf bays, their “VIP” bay will equip up to eight players and will have a multi-sport simulator as well including hockey, baseball, dodgeball, and others. The other three bays accommodate four players each. The simulators feature TruGolf hardware and E6 Connect software with approximately 100 courses. Justin added that giving local kids more sporting options no matter the weather is a positive for Warman and the area.

The Stupak’s have been collaborating on ideas with The Legends Golf Club and Head Professional Brent Eikelenboom. Details are still being ironed out, but Justin said the plan is to have the PGA of Canada member doing some coaching out of the facility.

“He’s going to be doing lessons here,” Justin said. “We don’t have it all finalized and booked up, but people can reach out to us or him. Then what we’ll do is get them set up with him, he’ll do what he does here in our place.”

League play will be offered plus the business is fully licensed and has a kitchen with pub-style food.

Justin and his father-in-law spent many hours over the last couple months constructing the business that was opened with a “soft opening” earlier in October. They are planning a grand opening celebration in November.

Amanda said the feedback from the community has been unbelievable with Christmas, birthday, and anniversary parties already booked. She noticed excitement growing even when the construction was underway.

“As the construction kept moving people kept coming by, walking in and asking if we’re open, a lot of good response that way and we’ve had a lot of fantastic responses on social media,” she said.