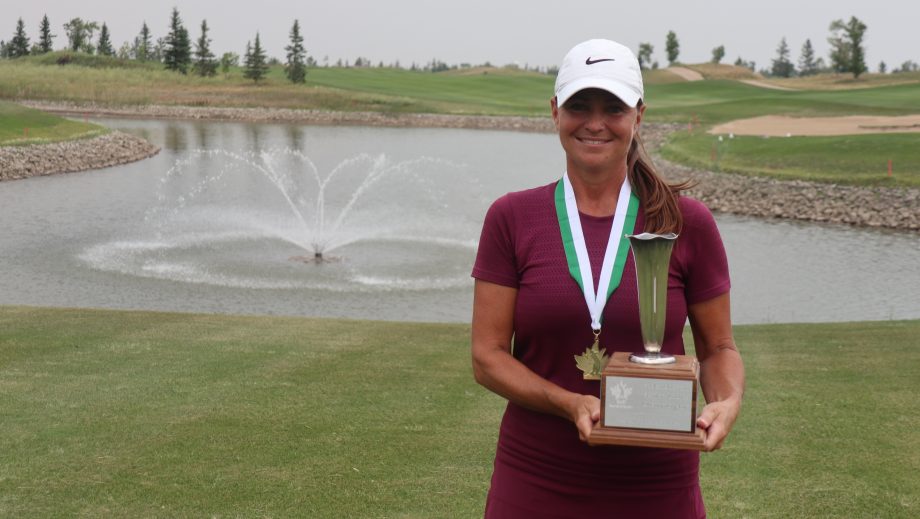 The Wascana Country Club member was the only player in red ink (1-under par) on Thursday allowing Walker to win the 54-hole event by eight shots over seven-time winner Lorie Boyle of Moose Jaw. Walker finished at plus-6, 222 for the tournament. She said after not playing last year due to COVID concerns the win feels nice.

“It feels great, I won in 2019 and with COVID last year I didn’t play so potentially missed out on the three-peat, but this feels really great here today,” she said.

Walker either had a share of the lead from the opening tee shot or the outright lead over three days at The Legends Golf Course in Warman on route to her third Saskatchewan championship. She won the amateur in 2016. Walker said she expected to be near the top of the leaderboard but with three rounds in a tournament you can’t take anything for granted.

“I do expect to be near the top but I take nothing for granted,” she said. “You need to put three rounds together, for the most part everything went well for me here in Warman even though I’m not overly familiar with the course. It does play a lot like the Wascana or the Royal Regina in some ways which I think did help me be successful.”

Walker is hoping to lead the Saskatchewan contingent into the Canadian Senior Women’s Championship from Aug. 31 to Sept. 2 in Bromont, Que.

Boyle was the winner of the Mae Balmos Award for the top women’s player over 60.

Weyburn’s Rick Hallberg ran away with both the senior men’s title, his second straight and third in four years, plus he won the mid-masters (40 years and over) championship on Thursday in Warman.

The Golf Kenosee player carded rounds of 71, 65, and 66 for a three-day total of 202, 13 shots better than Lavern Arndt and George Janson in the senior championship. Hallberg won the mid-masters by eight shots over Scott Allan and Chris Reid. He said the week went well at The Legends leading to the victories.

“I had a really good tournament, I played really good the first day, I couldn’t get any putts to go in, they were all going over the edge,” he explained.” The next two days I got Normy (Norm DeLaet) on the bag, he helped me with some reads and just a real calming influence. We’ve played a lot of golf in the past; I grew up playing with Norm. It was pretty special to have him on the bag.”

Saskatoon’s Rick Hillestad was fourth in the senior category, Martin Ring (Prince Albert) and Brent Wotypka (Swift Current) tied for fifth at 5-over par. Hallberg will head to La Malbaie, Que. for the national senior championship. He said going into this season heading back to the Canadian Championship and winning the provincials was his goal.

“My goal this year was to win this event again and take a shot at the mid-masters too,” he added. “It’s a good run.”

Warman golfer Darryl Czuy was fourth in the mid-masters, Regina’s Ron Swan rounded out the top-five.

Moose Jaw’s Ken Bradley was the winner of the Legends category, that is for players 75 and over.

Janson won the Super Senior division for players 65 to 74 years of age.