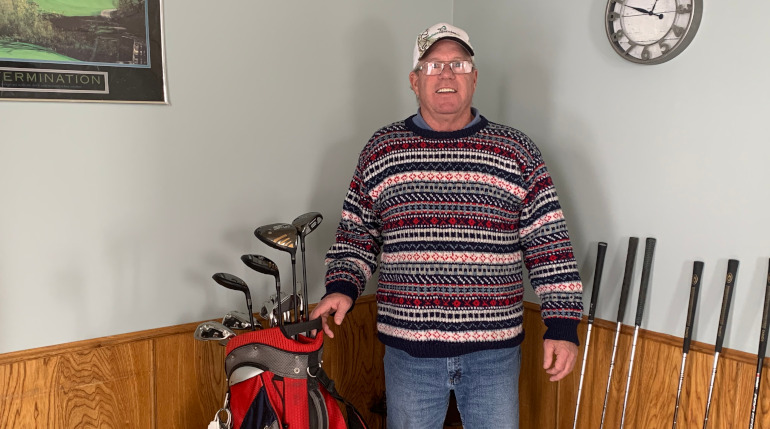 Danny Turner has been involved in the sport of golf for his entire life. He is now working in several areas of the game under the banner of Danny’s Golf Sales and Service in Delisle.

Turner essentially grew up on a golf course, his father Bill Turner was the superintendent and golf professional at the Saskatoon Golf & Country Club for four decades. Dan recounts the time of being around his father while building the third green at the city club.

“I was six-years-old, that was my first one,” he chuckled at his Delisle shop this week.

Dan has a wealth of experience in fixing carts, building clubs and maintenance of courses. He is combining all those factors into his business that opened in June.

“In this town there is probably 20 percent that are golfers,” he explained to Golf Saskatchewan. “I didn’t want to go jump in a truck or run equipment because my shoulders aren’t good anymore after a couple surgeries. I just wanted to get back into something, so I got back into everything. I used to deal in Club Car in the 1980’s so I am working on carts. I want to custom build and repair clubs, I had a driving range when I was in the city and I did some instruction.”

Turner has a hitting net set up in one of the bays of the shop located just off Highway 7 in the community 20 minutes from Saskatoon. Turner said the town’s course is busy and a gem in the area but his net works to keep your swing in form over the long winter.

“I know it’s not like going to the GolfDome or a simulator but if you just want to keep your swing it’s perfect. One thing about the net, you work on hitting it solid and you don’t have to watch where the ball is going,” he said.

Turner’s father was also the icemaker at the Rutherford Arena in Saskatoon. The two careers overlapped so the eldest Turner got away from golf for a few years but eventually found his way back to the Wildwood Golf Course. Turner’s mother was the proshop manager while Bill was the greenskeeper and professional. Danny learned more about equipment during his mother’s tenure in the proshop.

“Fitting clubs is a niche market,” he said. “It’s easy to walk in to a store and get a set of clubs, but fitting is a different animal. You need to know the game of golf, a person’s swing. Lots of times a person doesn’t even need new clubs, just some adjustments on the range.”

Turner admits he’s not going to make a fortune in the golf shop or the industry. He loves the game and wants to assist any way he can and give back to the area and community he’s called home for 18 years.

“I get a lot of my work from out of this town and in the town as well. You always want more right? I am just out here to help people in the game of golf, and I want to make it more enjoyable,” he added.

If you need a cart serviced or are interested in details on fittings or any other golf related questions Turner can be reached at 1-639-433-0333.