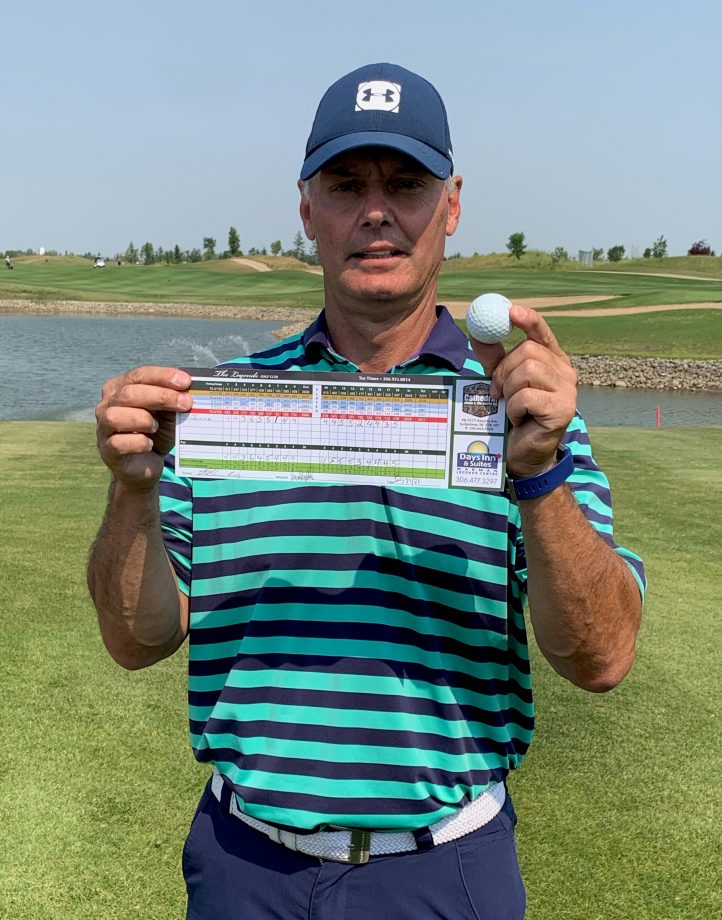 Regina's James Tsakas has his third career ace and first in competition after holing out off the seventh tee box at The Legends.
Clark Stork

Regina’s James Tsakas was the talk of Tuesday at The Legends Golf Course during round one of the Saskatchewan Senior Championships.

Tsakas recorded his third career hole-in-one and first since 1988 during the opening round of the tournament on hole seven in Warman. He said the ace was his first in competition. The one on his card helped the Royal Regina Golf Club member shoot an even-par, 72, good enough for a tie for seventh after 18 of 54 holes.

The ace was the first in a Golf Saskatchewan championship since Nelson Scott turned the trick in 2019 at the Royal Regina Golf Club.

Prince Albert’s Cliff Selander has the round one lead thanks to a 3-under, 69, in the first round. Selander is coming off a silver medal finish at the championship in 2020.

Three Saskatoon players are tied for second just a stroke back of Selander including Barry Macooh, Don Monson, and Shawn Strelau, the trio all carded rounds of 70.

Selander also shares the lead of the mid-masters (40 and over) division with his score of 69. He’s tied with Meadow Lake’s Chris Reid. Scott Allan of Saskatoon is tied in second with Strelau.

Round two begins at 7 a.m. on Wednesday, the tournaments will conclude on Thursday.

In the Senior Women’s Championship two former winners of the tournament are tied on top of the leaderboard at 3-over par.

A pair of Lloydminster golfers are sitting tied in fifth, Jo-Anne Schiller and Robin Acton shot plus-9, 81, during the opening round at Warman’s Legends Golf Course.

The complete first round results can be seen here.

The second round of the women’s championship begins at 11:20 a.m. on Wednesday.