Tisdale Riverside Golf Club a gem of the Northeast 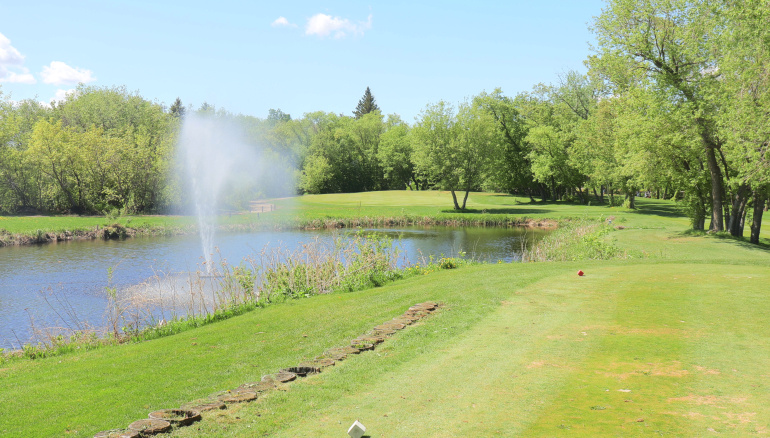 The Tisdale Riverside Golf Club is constructed on the banks of the Doghide River.

Tucked away just east of Tisdale along the banks of the Doghide River sits one of Saskatchewan’s top nine-hole golf courses.

Nearing its 100th anniversary, the Tisdale Riverside Golf Club (TRGC) winds over the water seven times with picturesque tee boxes over well-maintained fairways and greens. Playing from 2,500 to 2,900 yards and have slope rating of 110 to 133 the TRGC offers rounds suitable for all level of players.

Superintendent Marc Anderson, a born-and-raised Tisdale product said there are several holes that could be considered the club’s signature.

“There aren’t too many nine-hole courses close to us and we can probably say we’re the best because every hole is unique,” Anderson explained to Golf Saskatchewan. “Number one has a tree that’s over 100 years old in the middle of it and number four is with it. The two par-threes, one is hitting over a fountain onto a green, the next is across the river, a long par three. You get into back half where you are secluded by yourself, which is nice. Eight is another one along water. It’s a short par-four but it’s hard to play, it’s unique. Our greens now are probably better for this area than the 18’s around the area. People know we have some of the best greens around this region.”

Like most small-town clubs’ maintenance is kept at a steady pace. The club has recently planted trees, upgraded the cart path, build a new on course, fully serviceable washroom, and purchased new equipment. Five years ago the TRGC underwent a $250,000 flood mitigation project. President Shirley DeMarsh said the project was a huge development.

“Our course floods each year; a lot of the course is underwater, and it took a long time to dry and even after a major rain storm it took a long time to dry so we had a major project and we did a lot of fundraising. We had a professional (Golf Shape Construction) come in and do some landscaping to make it drain better. That’s helped us a lot, we have a lot more playing time now,” DeMarsh said.

Also dating back in time is the beginning of the annual Falkner Men’s Tournament. This year is slated to be the 86th annual event named after Don Falkner. The event features a match-play championship round and a live bagpiper at the first tee. The Lions host their annual tournament at the course as does the local RCMP detachment. The club conducts a club championship, a couples’ tournament and an annual women’s tournament. The Riverside launched a two-day member/non-member two-man event last year as well with solid success. The club hosts several leagues too with ladies playing Tuesday’s and Wednesday afternoons, men’s night is Wednesday, the seniors have their league on Thursday. The club has a few mixed nights sprinkled into the season as well.

The course is adjacent to a campground, baseball diamonds and has a driving range. Clubhouse and Campground Manager Bev Hamm said there is more than golf offered at the facility and in the town.

“We host anniversaries, class reunions, weddings, the swimming pool is here, mom and dad can drop the kids off at the pool and come for a round of golf,” Hamm said. “We really feed of the backs of each other in this community. Our RECplex is second to none.”

Hamm beamed that they had three weddings scheduled at the club this season, two unfortunately have been postponed due to COVID-19. She said last year a couple had their wedding at the course with the bride being from “beautiful B.C.” but when she saw Facebook photos of the TRGC she wanted her wedding at the course. The dance occurred under a tent on the driving range.