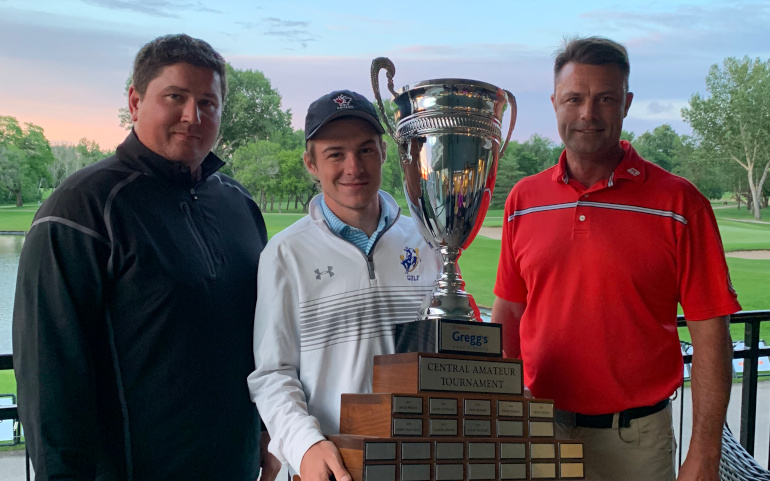 Roman Timmerman has his first win of the season.

Saskatoon’s Roman Timmerman is getting a late start to the golf season but what a beginning it is.

Timmerman, coming off a solid season at Southern Arkansas University (SAU), won the Reliance Gregg’s Central Amateur over the Canada Day long weekend at the Saskatoon Golf and Country Club. The 20-year-old recently finished his second year with the Muleriders where the school had a record year.

“We were able to qualify for regionals, we didn’t play as well as we’d hoped at regionals and weren’t able to qualify for nationals,” Timmerman told Golf Saskatchewan a day after the Central Amateur victory. “Coming off last year where we didn’t have a lot of success it was nice to really play some good golf and get a couple tournament wins under our belt and carry some momentum into next year.”

Timmerman had to withdraw from the NCAA Div. 2 regionals due to surgery. His injury slowed his start the summer back home in Saskatchewan, the tournament was his first of the season. Timmerman outlasted college teammate Kade Johnson in a six-hole playoff to win. He said sharing the last two years with Johnson at SAU is great.

“We’re both able to play some really good golf and help our team out. It’s awesome to be able to share that with him, he’s one of my best friends, so yeah it’s awesome,” he said.

Both Timmerman and Johnson shot even par over the three rounds. The third day featured two rain delays and over eight hours had elapsed from tee off to completion for the final group. Timmerman said the long layoff for him helped him earn the win.

He added that the playoff was a fun experience as well knowing there will be some bragging rights in the future.

“It felt like it was going to go on forever,” he laughed. “We just kept parring, after every hole we would just smile at each and shake our heads. It was a lot of fun.”

Timmerman will defend his title at the Scotia Wealth Management Saskatoon Amateur on July 6 and 7. He will then look to defeat Johnson at the Saskatchewan Men’s Amateur Championship where Johnson is the reigning title holder. Timmerman said his approach the Central Amateur will likely carry into the provincial championship.

“To win is the goal I guess, Kade is obviously playing great but if I’m able to win that would be awesome. I’m just going to keep having fun with it, but I’m not putting any pressure on myself,” he said.

Ryan McNall continued his torrid season finishing in a tie for third place behind the college pair. He shot 219, as did Justin Wood. Ty Campbell was fifth at four-over par. All the results can be seen here.

McNall upped his lead atop the Order of Merit standings with the third place showing.