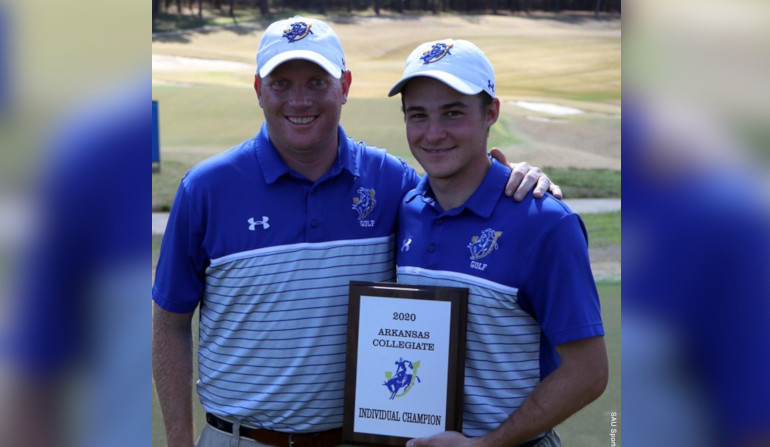 The Saskatoon product shaved four shots off his first round of the Arkansas Collegiate event at Mystic Creek in El Dorado, Arkanasas this week to claim the win by two shots. The Southern Arkanasas University (SAU) Mulerider carded 75-71 to win the event at plus-two on Tuesday.

Mulerider teammate Kade Johnson finished in a tie for 24th at 16-over. The Yorkton born Johnson fired back-to-back rounds of 80.

SAU won the event by three strokes. The team is in Branson, Missouri on March 23 for their next action.

Marc Sweeney put together a top-15 finish at the Skyhawk Invitational for the South Carolina Beaufort Sand Sharks from March 8 – 10. The Saskatoon product posted rounds of 80, 71, 75 for a 54-hole score of plus-10, 226. Sweeney tied for 14th in the 107-player field in Pine Mountain, Georgia.

The team was second among 17 squads in the event. The Sand Sharks are playing a match against Butler, an NCAA Div. 1 team on Thursday. They will travel to Rocky Face, Georgia on April 6 – 7 for their next event.

Connor Scissons compiled three steady rounds and Arizona Christian University won the ERAU Spring Invitational this week in Prescott, Arizona. Scissons, from Saskatoon, stroked a stellar 219 over 54-holes for a top-10 finish. Scissons competed as an individual carding 11 birdies through the 54 holes.

The Firestorm are off to Nipton, California for the Battle at Primm on March 16.

Kipling’s Carson Harcourt competed in the Winona State Invitational at Stallion Mountain in Las Vegas on March 9 and 10. The Minot State golfer shot rounds of 85 and 78 to finish at 19-over. He was tied for 54th, the Beavers placed ninth as a team in the event.

Next up for the Beavers is the Northern Sun Intercollegiate Conference Preview on March 30 – 31 in Liberty, Missouri.

Alex Schmidt (pictured) of Regina opened her spring season with an excellent showing at the Oregon Tech Invitational for Lewis-Clark State. Schmidt finished in fourth place at plus-four. The Royal Regina Golf Course member posted rounds of 81 and 76 at Eagle Point, Oregon.

Next up for Schmidt and the Warriors is their own Spring Invitational on March 16 – 17.