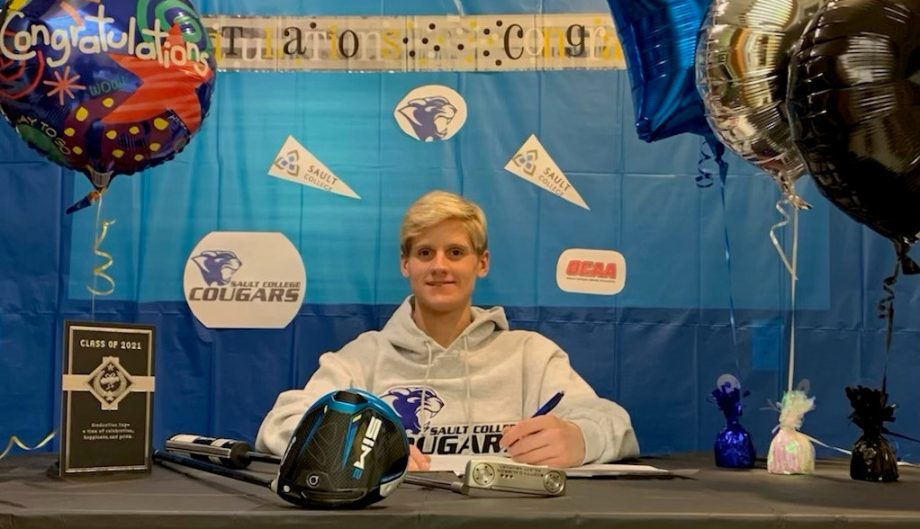 LeRoy’s Carter Timmerman has committed to a college in Ontario for next fall. The 17-year-old will join the golf team at Sault College in Sault Ste. Marie, Ontario.

Timmerman has been playing golf since a young age when he would play with his grandfather who he credits for his start in the game. He competed in local tournaments around the age of seven but became serious about competitive golf “about five years ago.” Now in his grade 12 year at the LeRoy High School Timmerman said seeing some of his golf peers commit to college golf teams he decided to seek a post-secondary opportunity.

“I started seeing a lot of the guys I golf with are going to college. I was looking at our scores and they were pretty similar so I thought I would give it a try and it works,” he said.

Timmerman has been one of the busiest junior golfers in the province over the last two seasons between the Maple Leaf Junior Tour (MJT), the Junior Lobstick and provincial championships. He has a career best fourth place finish at the Saskatoon Junior Open in 2019 plus a 10th spot overall in the Junior Lobstick in the same year. With steady results, hard work, and an improving game he is happy to continue to play competitively and get an education.

“The Sault coaches found me on the Next College Student Athlete (NCSA) website,” he explained. “We talked a lot and we really connected. They were really after me and wanted me to come down there and play golf and with COVID I wanted to stay in Canada.”

“It’s a big step for me. I can’t wait to meet my team and see what the school and competition is like down in Ontario,” he said.

Timmerman will again crisscross the province competing in events on the MJT and the provincial tournament in Moose Jaw as he completes his junior career. He said he has some goals in mind for the season before making the jump to the collegiate level.

“I’m looking for more consistency in my scores, my chipping, less three putts,” he added. “I have a really busy schedule, I will be golfing as much as I can, continue to work with my coaches and hope to get better as I go.”

Timmerman is going use his education at Sault to become a millwright.

You can hear more from Timmerman below.