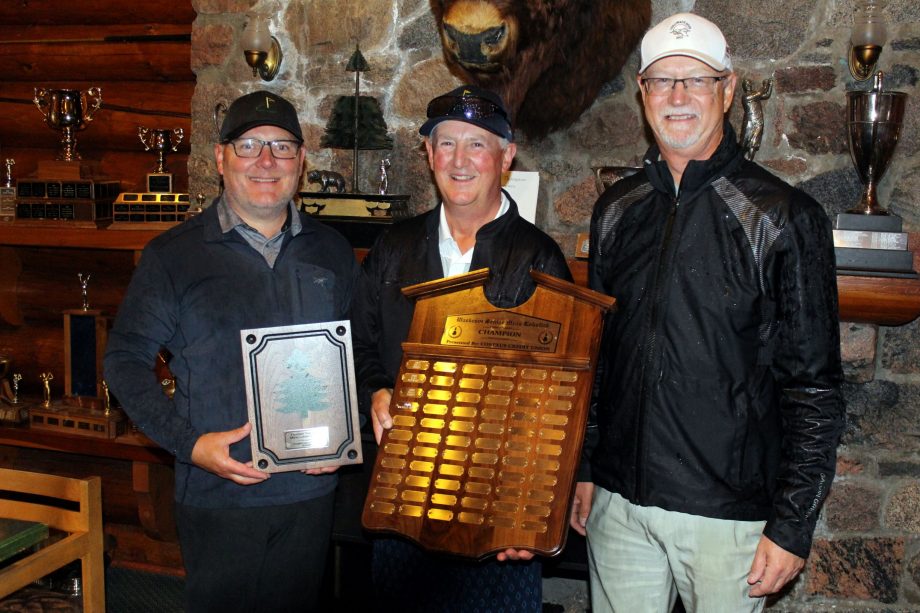 There was little separating Martin Ring, Cliff Selander and Roger Gilhespy at the Waskesiu Golf Course on Thursday evening.

However, it was Mother Nature that had the final say as to who would win the Championship Flight at the 2021 Fountain Tire Senior Men’s Lobstick

A thunderstorm resulted in a playoff being called off after the third extra hole and this year’s title to be shared among the three competitors, who each got their name on the trophy for the first time.

“It got a little scary there at the end,” Selander said. “I’ve played in a bit of lightning before, but up here it’s a different kind of lightning. Your down there by the lake on the third hole and it’s pretty amazing to see the storm there as it started to come through.”

“It would have been nice to have continued on, but the weather just didn’t want to cooperate with us today,” Ring added.

While Selander and Ring have made the drive up from Prince Albert to take part in the tournaments at Waskesiu for years, this week marked the first time Gilhespy had been to the course.

“I was just finishing a round in Chilliwack (where Gilhespy lives) on Sunday afternoon when I got a call from the folks here saying there was a spot open,” he said. “I was pretty happy to jump in my truck and head up here.”

Gilhespy raced up the leaderboard on Wednesday with a three-under par round of 67, which proved to be the best of the week.

“That was just one of those rounds you think about and wish for often,” Gilhespy said. “Everything was working well and my putts were rolling in. It was a lovely day.”

Gilhespy followed up that performance with a round of 73 to finish the week at nine-over par.

Selander, who was tied with Gilhespy for second place in the championship flight going into the final round, saved his best shot of the week for the 18th hole on Thursday as he drained a 40-foot birdie putt to match Gilhespy’s score.

“I knew that I was one shot behind Roger going into that hole and I knew that I had to give the ball a pretty good run if I wanted to have a chance,” Selander said. “I made sure that I hit hard enough and I was able to get it on the right line and it just managed to get in at the front of the hole.”

Ring, who shot a 72 on Thursday, had already finished his round as the final group made their way to the 18th hole.

“Even though I was just ahead of them on the course, I didn’t know where I stood in the standings,” Ring said.

“I was only two shots back going into today, so I knew I had a chance if I could post a good number. I ended up going three-over on the front nine, but I had a strong back nine (which included a birdie on the par-four 15th) and went one-under there.”

Ring and Selander hope to continue their strong play next week as they take part in the Fountain Tire Men’s Lobstick, while Gilhespy plans to return for the 2022 Senior Men’s event.

“The course is lovely and everyone here has been fantastic,” Gilhespy said. “It was definitely an odd finish to the week, but I’m just happy to be in the company of the two fine gentlemen that I tied with.”

Doug Kozak, who led the tournament after the first two rounds, ended up in a tie for fourth with Brad Phelps, who was the runner-up in the 2020 Senior Men’s Lobstick and Men’s Lobstick tournaments.

Defending champion Warren Gnam of Medicine Hat finished second in the First Flight, which was won by Delisle’s Colin Coben.

The other winners from the senior event were as follows:

Gary Tuffs road to the Super Senior Championship Flight was a lot different than his previous triumph.

After defeating Blair Sterling by six shots in 2019, the Coleville product went to a playoff with Doug Anderson before capturing his second title in the last three years.

“I was a little fortunate today,” Tuffs said. “When you look at this field, there are so many good golfers that could have won it.”

Unlike the senior championship flight, the super senior playoff didn’t last long as Tuffs tapped in for par on the par-four first hole and watched on as Anderson’s long par putt attempt slid past the hole.

“My iron shot sailed a little more than I thought it would and it ended up on the back of the green,” Tuffs said. “I choked up on my chip and I just had a couple of inches left for that par putt.”

Ray Field, who was tied for the lead with Tuffs going into the final round, ended up three shots back in third place.

Jim Scissons and Doug Piper rounded out the top five, with Bob Klotz, Blair Sterling and Bill Lewis making up the rest of the championship flight.

The other winners from the Super Senior category are as follows: