The week that was in Saskatchewan golf 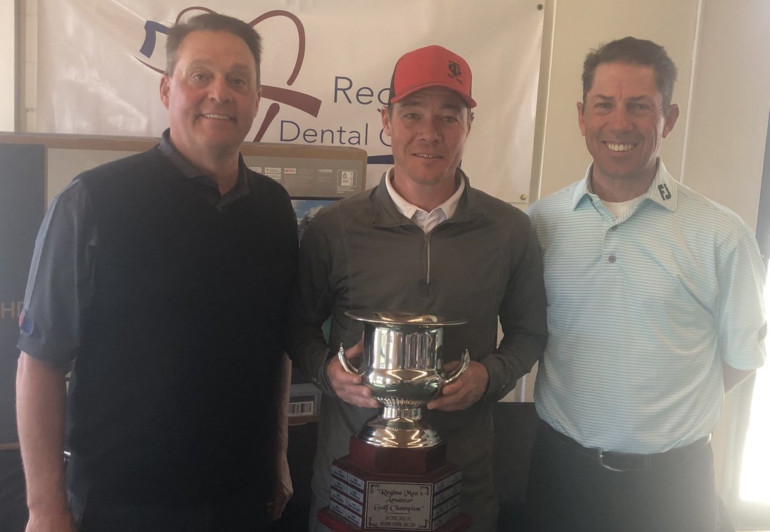 Ryan McNall (middle) collected his third Regina Am. championship this past weekend.

Almost every Order of Merit Tour (OMT) has teed off for the 2019 season in Saskatchewan following a busy weekend on the course.

The Regina Dental Group Men’s City Amateur kicked off the Men’s OMT in the Queen City played over two days at Deer Valley Golf Club and the Murray Golf Club. Wascana Country Club member Ryan McNall picked up his third victory at the event. He said it’s nice to win early in the season.

“It’s really good, it gives you confidence right off the bat. Obviously you are playing pretty well if you can win a tournament like that so it’s an exciting way to start the year,” McNall said.

McNall fired a 68 on day one at Deer Valley followed by a two-under, 70 at the Murray on Sunday. He held off Jason Galon by four strokes. McNall said the margin of victory could have been tighter.

“I played really well, probably only hit four bad shots and got pretty lucky on a couple of them, they turned out better than they could have been,” he said. “Jason played really good; it was closer than it looked. The last hole at the Murray is kind of gimmicky and anything can happen on that hole. You can make anything from a three to a six or seven, so I was trying to keep it at three of four ahead on the back nine knowing anything could happen on 18.”

Kipling’s Carson Harcourt, fresh off his season at Minot State University tied Galon at 142 in second place. Shawn McNall rounded out the top three shooting a one-over, 143. Ryan said it was nice to having bragging rights for a week over his brother.

“He’s won his fair share of tournaments recently, it’s usually 50-50 between us,” he laughed. “A good start to the year though.”

You can see the complete results here.

Also on May 25 and 26, the Legends Golf Club in Warman played host to the Legends 2 Man Scramble. The team of Kendall Nicolas and Dan Oliynyk used their home course to their advantage for a one stroke victory over Ty Campbell and Jehremy Ryde.

Nicolas and Oliynyk shot 63 during round one and a sparkling 59 during round to hold off the Saskatoon pair. Parker Nolan-Ens and Jerry Christiansen rounded out the top three at -20, 124.

The next stop on the men’s tour is the Scotia Wealth Open at Nipawin’s Evergreen Golf Course on June 1 and 2.

Debbie Davidson and Lori Rittwage won the two-woman best ball 18-hole event shooting a plus-10, 82 on Saturday. Carla Odnokon and Brianne Daviduk were one stroke back in second place at 11 over. Tracey Edmison and Sylvie Francoeur placed third at plus-12, 84.

Complete results can be seen here.

The next stop on the ladies’ tour is the Prince Albert Northern Ladies at the Cooke Municipal Golf Course on June 1 and 2.

The junior OMT resumes this weekend with a Future Links event in Ponoka, Alberta. The senior men’s OMT begins in Waskesiu on June 4 – 6 for the Senior Men’s Lobstick.

The PGA of Saskatchewan also began their 2019 season with the KR Pro Partner event at the Royal Regina Golf Club on May 27.

The PGA pro-amateur partner 18-hole tournament was won by Cole Zawislak and Drew Kocur. The duo was tied at minus-four with Ryan Wells and Brad Phelps but were determined the winners by retrogression. Four teams tied for third place at three-under par. Scott Knapp/Ken Rodgers; Wayne Fairbairn/Ryley Blyth; Pat Marcia/Jason Galon; and Garrett McMillan/Chad Lincoln all came in with 68.

The Scotia Wealth Open in Nipawin is next for the Saskatchewan professionals.