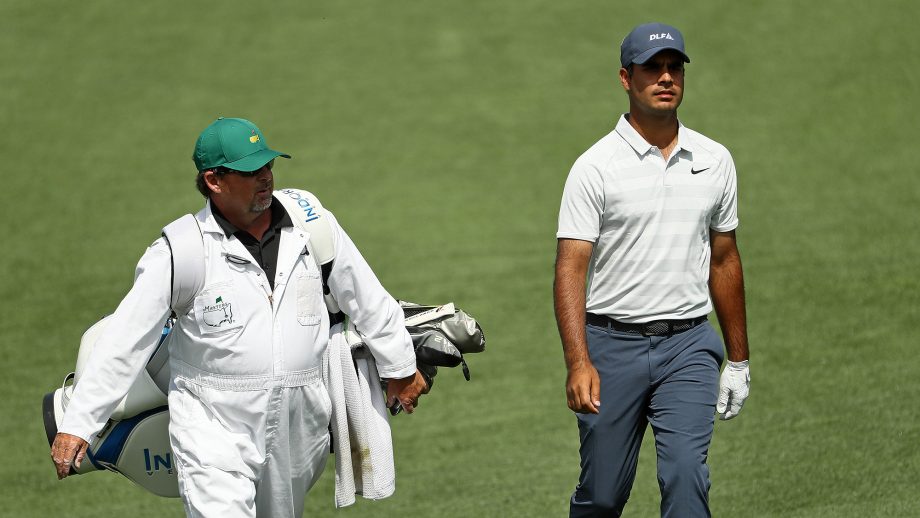 AUGUSTA, GA - APRIL 02: Shubhankar Sharma of India walks to a green during a practice round prior to the start of the 2018 Masters Tournament at Augusta National Golf Club on April 2, 2018 in Augusta, Georgia. (Photo by Jamie Squire/Getty Images)
Brian Lee

AUGUSTA, Ga. – Vandini Sharma of Chandigarh, India, is the 16-year-old sister of Shubhankar Sharma, who makes his debut at the Masters this week. Her short stories have won literary awards. She has agreed to write a first-person account of her experience at the Masters for The Associated Press.

When reporters and all the new people who’ve recently entered our world ask my brother what it felt like to make the Masters at 21, Shubhankar gently shrugged, and said it wasn’t completely unexpected. After years of hard work and the magical last four months that have flown by, the sun is beginning to dawn on our journey’s horizons.

My first view of the Masters popped up like a jack-in the-box. I felt struck out of the blue. This was the first golf tournament I’d known as a toddler and memorized with care.

Its reputation was fortified by years of sleepless memories. My father and brother would sit rooted for hours, exhilarated and enthralled, before the blaring midnight TV screen. The Masters symbol was gradually emblazoned upon my mind; the classic soundtrack now hums through my dream world of hazy childhood memories.

The first time it really sunk in that Bhai, (brother in Hindi, as I address Shubhankar) would play the Masters came well after my father first shared the news.

And it involved a bit of mischief.

As little sisters do, I pickpocketed Bhai’s phone on the final day of the Indian Open as I was asked to take care of it. Then later, sneaking into a quiet corner with my back against the wall, I had a go at cracking the iPhone’s password. The first thing that glowed to life on screen when I touched it was the wallpaper. There was an invitation that began, “The Board of Directors cordially invites …’.

In that moment, I could imagine Shubhankar opening the email and taking a screenshot to pin up, and the sudden feelings of pride and exhilaration of his whole journey washed over me. With the whirl of tournament weeks and crazy time zones, we’d never got to talk about the moment he knew it was happening.

And this reflected everything Bhai felt.

Not to be outdone by fiendishly modern methods, though, the Masters officials sent an old-style parcel post weeks later. I picked it up coming home from school and the moment I read the words, “Augusta, Georgia,” my mother and I snapped it open. A neat stack of soft parchment letters inscribed in green ink slipped out – addressed to none other than Mr. Shubhankar Sharma residing in Sector 12 Panchkula, Chandigarh.

A memory was pulling itself loose in my mind, of being 6 years old and stepping into the shower to discover the mirror fogged up with water vapour. The previous 12-year-old occupant, my Bhai, had squiggled in cursive letters, “The Masters,” above a trophy titled “Shubhankar.”

The first thing I did was to spread out the letters from Augusta on our sofa, photograph them and send him a ceremonial video, prim, with a thick British accent. You could imagine the Harry Potter vibes of a first Hogwartsian letter. Our spiritually devoted mother then placed these precious cards in the home’s temple, and blessed them.

This homely celebration was humbly sweet, but it did little to prepare me for the actual press conference I’d attend at Augusta National on Tuesday. It was hosted in a vintage hall with a small set of senior journalists and the solemn gaze of great men hanging in oil portraits on the walls.

No matter how aware one is of the monotonously repetitive way sportsmen tend to drone on, a blinding haze of gleeful affection tends to take over when it’s your own brother at the mic.

“What does it feel like to be now known as the future of Indian golf?” he was asked.

In that moment a spotlight I hadn’t imagined lit in my mind.

Later on, Bhai described the kids playing back home and our small Indian golfing community. These were all the people I was familiar with, in my 16 years of following him around fairways and greens.

Although Bhai accepts the pressure with Zen-like calm, I knew the truth – the hopes of 1.3 billion people were riding the currents of history once more.

Everyone we’ve ever known would be looking on, as only the fourth Indian in history sets foot on Augusta National’s majestic grounds.

It’s moments like these I’m trying to begin to get used to that make my chest swell like a helium balloon.

Something of a merry tussle happens in my mind – between the goofy big brother I’ve known forever and the golfing prodigy, who was beginning on the path of legend.

This week I’ve also been determined to explore my privilege of being here.

The overwhelming maiden impression I had in the past 36 hours of the Masters was of old-school grandeur.

There was the famous oak tree, the cheerful staff and painted signs, plus ice-cold lemonade cups. A general whiff of elegance lingers everywhere you go.

I’ve sat on oak benches ten times my age. I have pretended to calmly hover as Tiger Woods walked by ten feet away. The American people, though, seemed as freewheeling, chilled and casually friendly as no others I’ve ever observed.

I also lucked out to get into the snowy white clubhouse, where the portraits of all past champions beamed down upon me.

This gifted me a profound moment of thinking about the significance of legends. In time, today’s champions would become history as well, and the game of golf would evolve on, rewarding the worthy and raising new heroes.

Seeing the bushing, poplin-skirted women captured around Jack Nicklaus in a portrait made it easier to imagine us modern girls being photographed for the memory of new generations.

It all seems surreal.

In writing this piece, I’ve attempted to remember any conversations with my brother on the Masters. It is a piece of work actually, in light of Bhai’s unwavering ambition to be as silly and non-serious as possible off the course. Thus naturally, I found something goofy to round off.

In late autumn three years ago, my brother was 18 and chatting about his favourite player’s Masters performance as we walked down the pot-holed neighbourhood roads, hand-in-hand.

“When I get to the PGA I’m going full Rocky mode. Just like go underground for six months and get ripped. Grow out my hair,” he said.

I laughed. “Your face will be hairy too, Bhai. Like a mountain savage.”

“Oh yeah. They won’t be able to recognize me,” Bhai shrugged with a bit of mock attitude. “I’d be silent and talking to no friends. Just playing m’game and winnin’.”