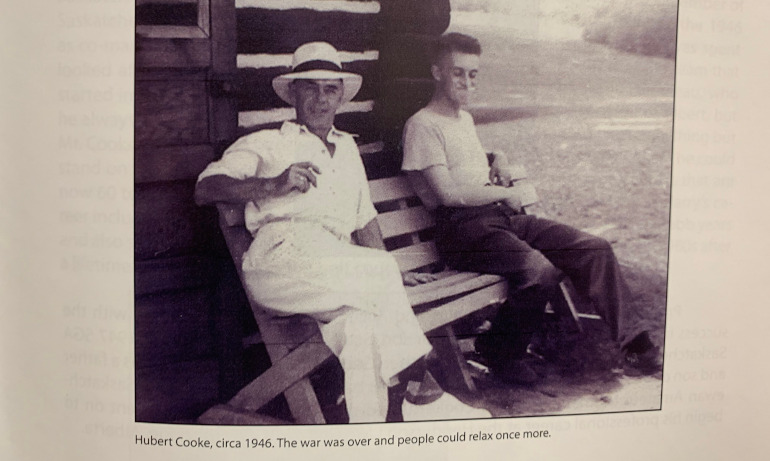 Most golf tournaments were cancelled during World War II due to motoring restrictions but started again as clubs reorganized in 1946.

Harry Burns of Regina Golf Club defended his Saskatchewan amateur title by defeating Angus “Scotty” Cameron, the winner of the Junior Championship.  The award for the best sand-greens player in the qualifying round went to Estevan’s Roy Sanquist.  After the first two rounds of Open competition Regina pros Tom Ross and Wilf Greenwood were tied for the title with 147 strokes.  The winner was declared the next morning after eighteen holes in the professional competition.  This turned out to be Wilf Greenwood who took both the Open and Professional titles.

For the first time a Juvenile event was held for boys under age 16.  The trophy donated by D.P. Pile of North Battleford was won by Par Fletcher, son of pro Fred Fletcher.  The Junior changed to a 36-hole medal competition, as the juniors could also compete in the amateur.

Edmonton was supposed to host the national championship in 1940 but the RCGA cancelled it due to the war, disappointing western golfers in particular.

1940 Women: The CLGU Saskatchewan section had planned to hold their championship at Riverside Country Club but cancelled it.

There were 102 amateurs entered, 9 pros, 6 juniors and 4 juveniles.  Army dentist, Captain Bob Reid, decisively won the Amateur Championship, defeating his SGCC clubmate Bill Thorpe.  Kelly Carin of North Battleford was Junior champion.  The best sand-greens player in the opening round was Ralph Carin.  In a repeat of last year’s results in the Open, Wilf Greenwood and Tom Ross were tied at the end of the first two rounds with 148.  Greenwood shot a sizzling 69 the next day to establish a course record as well as win the Open.

The SGA annual meeting voted to open amateur tournaments to golfers who, because of their location, were unable to belong to member clubs.  Fees were waived for future tournament entries from members of His Majesty’s Forces.

Margaret Esson of Rosetown won her third provincial championship, 5 and 4 over Isabel Dalby of Saskatoon.

Eight local rules were in effect for the tournament, including: #2: “A ball embedded in the putting green may be lifted and placed without penalty, as close as possible to its original position but not nearer the hole.”  Rule #5 stated: “If a player’s ball is not found on a fairway where the ball is supposed to have come to rest and gopher holes are in the vicinity, the ball may be deemed to have gone down a gopher hole, and a further ball may be dropped in the vicinity and played without penalty.”

The provincial Senior men’s championship, organized separately, was held at Wascana Country Club in 1942 and 1944 and at Regina Golf Club in 1943 and 1945.

After the war Newt Byers took up the reins as president of the Saskatchewan Golf Association and was reelected to the post the following year.  Now, fifteen clubs belonged to the SGA claiming a total of 1324 members.  Tournaments were reinstated and Regina Golf Club was chosen as the venue for the first post-war event.  There was a new optimism on the golf course as things got underway.  A columnist in the Leader-Post mused:

As they tramped over the rich green, carpet-like fairways of the Regina Club this week, golfers must have paused a moment to recall tournaments that were held when the deck was stacked against them.  They played in Saskatchewan when yawning cracks gobbled up balls on the fairways and there wasn’t a blade of grass this side of Winnipeg.  The dust blew and hordes of grasshoppers covered what was left of the greens.  Those were grim days.  But the golfers were like the farmers.  They stuck with it and rode out the storm.  This week they are competing over a layout that is a reward for their faith.  The smell of good, prairie earth is in their nostrils.  They bite into the turf with iron shots and smile when they get that solid feeling in their wrists and divots follow the flight of the ball.  Golf is a game to enjoy again.  (Leader Post, July 9, 1946, p. 12, Dave Dryburgh column)

The 1946 Amateur final match turned out to be a repeat of 1936 with the Reid brothers, both dentists, playing for the title.  Dr. Bob Reid, 29 years old from Prince Albert, prevailed again over Dr. Ben Reid, 30 years old from Regina, in a match that went to the 36th hole.

Wilf Greenwood as an amateur again, not a professional, won the Saskatchewan Open with 143, his third Open title in a row after wins in 1940 and 1941.

Saskatchewan sent a Willingdon Cup team to Nationals, with expenses for the train travel to Edmonton shared between the national and provincial associations.  The provincial junior champion was Ernie Greenley, whose trip to compete at Nationals was covered by the RCGA.  To conform with dominion rules, the provincial age limit for future junior competitions was raised from 18 to 20 by a vote at the annual meeting.

The RCGA officially adopted the synthetic golf ball for all their tournaments in place of natural rubber balls.  Players could use either Canadian balls or the larger American ones.  (Bradley, p.89)

In the championship match Rene Robbins of Regina achieved a hole-in-one on the 193-yard eighth hole on her way to defeating Alice Cooke of Prince Albert 2 and 1.

The annual meeting went on record as wanting the stymie to be taken out of match play.

[Note:  A stymie occurred in match play when one player’s ball was on the putting green between the hole and the opponent’s ball.  It could not be lifted out of the way unless the two balls were within six inches of each other.  When the USGA and the R&A finally issued joint Rules of Golf in 1952, marking and lifting a ball on the putting green was allowed regardless of the distance between balls.  That’s when stymies were no longer a factor in golf.]

Pat Fletcher, SGCC professional, won both the Saskatchewan Open and the Professional event, with Par Fletcher (young son of Freddie Fletcher) placing second in both.  The Amateur Championship went 39 holes, the longest in the event’s history, before Geoff Cooke, son of Prince Albert’s golf professional, prevailed over Elliott Andrew of Saskatoon.

The annual meeting of the SGA confirmed sending the junior champion and the Willingdon Cup team to Quebec City for nationals.  It was decided that in future the executive of the SGA would consist of the elected officers plus the presidents of affiliated clubs.  With a reduction in affiliation fees it was hoped that smaller clubs in the province would join the association.

In the Saskatchewan Amateur, Claude Shackell beat his clubmate from Prince Albert, Eric Ridington, on the 37th hole.  Pat Fletcher, the Saskatoon Golf and Country Club pro, won both the Open and the Professional categories, taking home $300.  He broke the P.A. course record with a three under par 68 and finished with a score of 139, the best since the start of the Open event.  Ernie Greenley won the Junior Championship and a trip to nationals in Hamilton, ON, along with the Willingdon Cup team of Shackell, Ridington, Gordon Beattie, and Cliff Soberg.

At the annual meeting of the Saskatchewan Golf Association, Dr. Ben Reid was re-elected president, and vice-presidents were elected for both northern and southern regions.  A new “dollar plan” from the RCGA was adopted for collecting one dollar from each affiliated golfer to be split between the national and the provincial associations.  Saskatchewan contributed $625 for this year, up from the $60 it had been sending.

Ernie Holiday was Saskatchewan’s long-time representative to the RCGA.  In 1941 when he was reelected it was noted he had held that position “for some years.”  He was instrumental in the Saskatoon Golf and Country Club being awarded the 1950 Canadian Amateur.  He golfed at Riverside Country Club and excelled as a competitor in tournaments around the province.  The golf community was saddened when he passed away suddenly just as the 1948 Saskatchewan tournament was about to start.

The provincial team was chosen through a point system based on trials at their home course during the season as well as the annual tournament.  The champion, Phyllis Barclay and her final match opponent, Mabel Palko, were joined by Mrs. Van Impe and Rene Robbins on the trip to nationals in Saint John, NB.

The Saskatchewan Section of the CLGU consisted of ten clubs with 805 lady members. The annual meeting adopted the dollar-a-year plan to raise money for the team fund.  The provincial tournament was closed to golfers from other provinces.

After the first day of competition at the provincial tournament the Star-Phoenix suggested that it would probably go down in history as the “big blow” event.  “Playing in a fifty-mile-an hour gale that almost blew the golfers off Moose Jaw’s rugged Willowdale course and sent scores skyrocketing, Tom Ross, veteran Regina Club pro, captured the Saskatchewan Open crown.”  (Star-Phoenix, July 2, p.14)  During two rounds Ross scored 183, 23 strokes over par.

Cliff Soberg eked out a 2 and 1 win over Bill Woolley for the Amateur Championship, and joined Gordon Beattie, Clarence Ashworth and Bob Gray on the Saskatchewan Willingdon Cup team.  Along with the Junior Champion, Bob Turner of Saskatoon, they travelled to New Brunswick to compete at nationals.

A 14-year-old competitor made her debut on the golf scene:  Joanne Goulet won the long-drive contest for the bronze division and made an impressive showing in her matches, causing the Leader-Post reporter to predict, “she’ll likely be heard from in future years.”

Rene Robbins and Phyllis Barclay, the finalists, along with Mrs. Van Impe and Eileen Price were chosen for the provincial team and competed in Vancouver at nationals.  Four Saskatchewan women golfers had a handicap of six or under.

Attracting a lot of attention at the 1946 provincial tournament were the Kaddy Kars brought in from Edmonton by Tom Ross, the Regina Golf Club professional.  These were described as “nifty little two-wheeled affairs for toting golf clubs around the course”.  (Leader Post, Jul.8, p.12)

This publication was produced by Saskatchewan golf historian, Lori Harvie. Golf Saskatchewan thanks Lori for the contributions.