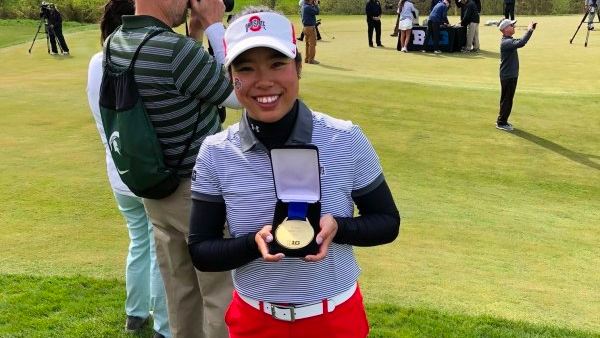 MAINEVILLE, Ohio – Calgary’s Jaclyn Lee etched her name in the history on books on Sunday, tying a 54-hole scoring record at the Big 10 Championship en route to a four-stroke victory.

Lee, a three-time National Amateur Squad member, went wire-to-wire at TPC River’s Bend, kickstarted by an opening-round 66—the lowest score of the tournament. The Ohio State junior followed with a second-round 68 and battled through a tense final round which saw her lead shrink to as little as one.

“This means a lot to me,” Lee said, greenside at the 18th. “It was a goal that I set at the beginning of the year and I’m so happy to achieve it. After coming in to the final round with a five-stroke lead, things got a little nerve-wracking today but I’m glad to walk away with the title. To tie the record and have my name in the history books is pretty cool, too.”

The win marks the third NCAA title of the year for the 20-year-old—she collected victories at both the Westbrook Spring Invite and the East & West Match Play.

Collectively, the Buckeyes finished fourth at 1 over par. Lee will lead the Buckeyes into the NCAA Regionals, getting under way on May 7.