Taylor made for aces; Saskatoon golfer on unbelievable run 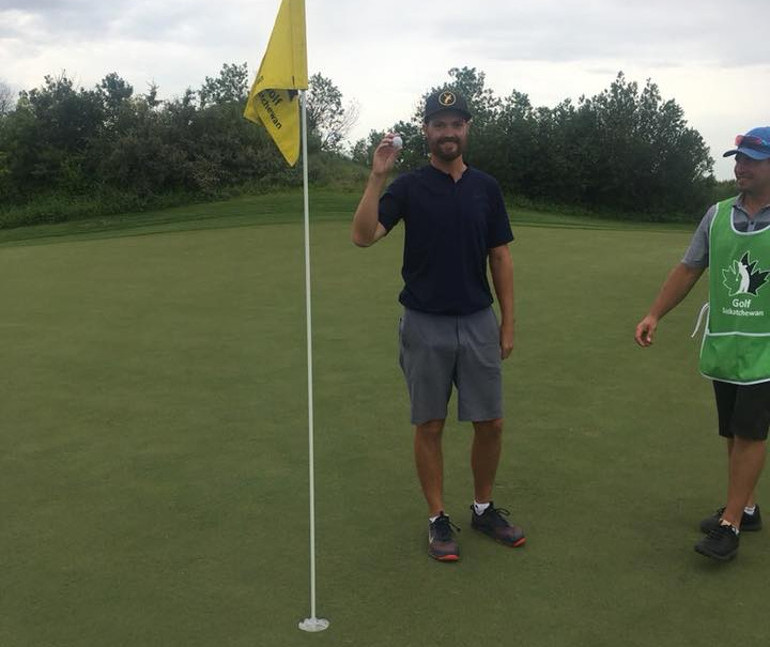 Taylor Afseth hit a hole in one during the Men`s Amateur Championships on July 18.

When it rains, it pours.

That sentiment isn’t words golfers usually like to mutter but for Taylor Afseth it’s raining buckets. The Saskatoon Golf and Country Club member has unbelievably hit three aces in 12 days, all at different courses. According to Wikipedia, a golfer has a one in 12,500 chance of hitting a trio of hole in ones in their lifetime. Afseth didn’t need two weeks between his first three. He said he’s still having a hard time believing the ball fell.

“I can’t even explain it, it’s just weird,” Afseth said. “I don’t know, three shots no different than any others I’ve hit, and they went in. Expect the unexpected.”

The first came on hole 11 at Dakota Dunes Golf Links during the second round of the Men’s Amateur Championships on July 18. His ace on the 211-yard hole helped vault him up the leaderboard landing a spot in the national mid-amateur championship later this month. He said that was a memorable moment.

“That was special, when it went in I was like, I can’t believe it happened here. When I needed it, in the biggest tournament in the province, that was so special. We were all very excited,” Afseth said.

Afseth picked up his second ace, also during a tournament. He was playing in the Ironman at Silverwood Golf Course in Saskatoon. The 132-yard shot also came on hole 11. Afseth said he never thought the tee shot had a chance to drop in.

“That one I didn’t hit near as well, in the air it looked like it was headed for the centre of the green. The greens were fast, it rolled a long way and went in,” he said.

His most recent hole in one came on hole three at the Rosetown Golf and Country Club on July 30. When the ball hit the cup on the 223-yard par-4, Afseth was speechless.

“I just shook my head, I didn’t know what else to do,” he quipped.

Afseth started playing the game with his grandfather at Turtle Lake and in Saskatoon with his dad. He said he’s been involved in the sport his entire life. When he was young his grandfather took him to a Canadian Junior Golf Association event in South Carolina that was a “really cool experience.” The 25-year-old said the aces are great for his confidence in preparation for his next big event, the Canadian Men’s Mid-Amateur Championship at Victoria Golf Club.

“It definitely helps, I’ve hit a lot of shots that have looked like that in the air in the last couple days. It makes you nervous knowing it has a chance to drop and it has been lately. I’m going to try and keep it going,” he said.

Golf Saskatchewan has a hole in one club on their website. Luis Nicholas amazingly has two of them at Holiday Park Golf Course this season. Keon Turner, 12, hit one on July 30 at TS&M Woodlawn Golf Club as well.