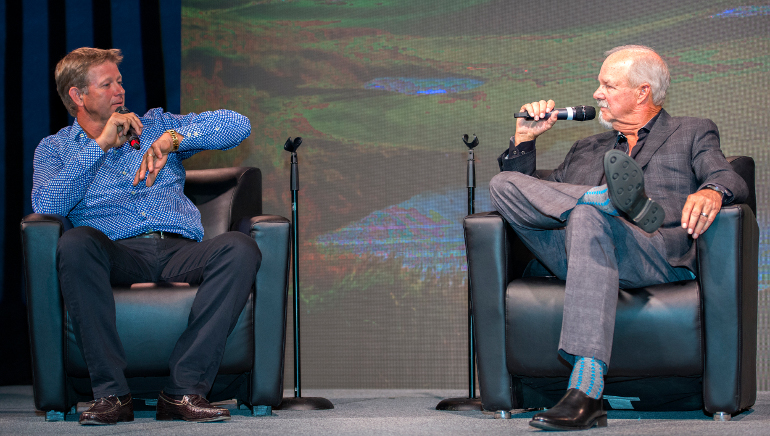 Highlighted by the stories of the “Goose”, the 2018 Synergy 8 golf tournament and gala was a rousing success.

On Aug. 28, 260 people took part in the golf tournament at the Willows in Saskatoon. Later in the day almost 1,000 attended the banquet at Prairieland Park. Long-time golf commentator Gary McCord, two-time US Open champion Retief Goosen, and Golf Channel personality Holly Sonders took the stage highlighting the program. During the evening, Premier Scott Moe presented the Synergy 8 group with the Saskatchewan Premier’s Service Club Award for their charity work over the last decade. Synergy 8 member Rob Lozinski said the 10th annual event was a memorable one.

“From our award from the province given by Premier Moe, to the silent and live auctions, to the meal, to NHLers Eric Gryba and Cam Talbot auctioning off some Edmonton Oiler hockey tickets and arena tours. The Humboldt Broncos and Saskatoon Blades event announcement on Sept. 22, to the question and answer session with Holly Sonders, Gary McCord, and Retief “The Goose” Goosen, it was quite an evening,” he said.

The Blades are going to honour the families effected by the bus crash in April involving the Broncos. Canadian LPGA golfer Alena Sharp used a specially designed Broncos golf bag at the CP Women’s Open in Regina last month. The bag was auctioned off for $19,000 with the proceeds benefitting the Humboldt & District Hospital Foundation. The emotional portion of the event was short lived, Lozinski said the three celebrity guests kept the crowd laughing all night.

“Retief regaled us with his story of being struck by lightning and talking about his two US Open wins. McCord was delightfully hilarious and spontaneous with stories of the best putters and strikers of the ball he’d ever encountered. Holly added beauty to the two golf beasts up on stage,” he said.

The proceeds from the overall event are going to the Jim Pattison Children’s Hospital Foundation. Lozinski said they are still gathering the total. Since the group’s inception they’ve raised $3.6 million.