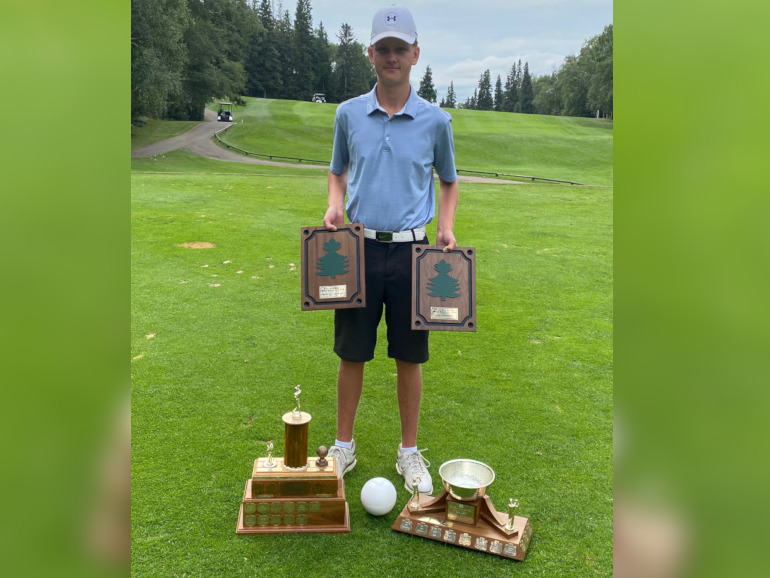 When Alex Swinnerton was six years old he started playing golf with his dad at Waskesiu Golf Course. Starting with the back nine and eventually taking on the entire 18 holes the Saskatoon product said he’s “never stopped.”

Now 15, the years on the course are leading to podiums and championships. Swinnerton picked up his first win at the start of the 2019 Maple Leaf Junior Golf Tour (MJT) schedule and followed the performance with a second-place finish. Since then Swinnerton made up his mind that golf is something he could excel at.

“When I first one my MJT, it was my very first win and I think it was my first podium too,” he told Golf Saskatchewan. “I decided to work hard after that and see how I’d do for the rest of the summer. Again, I just started working hard, kept working and the wins came out and the hard work paid off.”

Swinnerton capped the 2019 season with a trip to the Western Canada Summer Games as a member of Team Sask. He placed ninth overall and assisted in the team winning the bronze medal. He was the under-15 Order of Merit Tour (OMT) winner as well.

He was lucky enough to win a trip to Florida last year and take part in a week long camp hosted by renowned golf coach Sean Foley. Swinnerton said the experience really elevated his game.

“The coaching there is unreal,” he chuckled. “I worked a lot on my short game and got that dialled in with the coaches there and my putting. They have a lot of different technology, it wasn’t so much like a TrackMan or anything, it was more manual, but they showed you a lot of data. They also gave us a lot of drills to work through over the rest of winter and then into the summer which helped me quite a bit. It was a really good experience.”

Swinnerton admits he didn’t have a great MJT season in 2020 but claiming the under-17 Saskatchewan championship, a third place and national spot at provincials, and the Junior Lobstick title fits the bill of a breakout season.

“MJT’s weren’t so good this, I wasn’t hitting the ball very well for some reason during those tournaments, but I got to provincials and I actually played really well. I was good enough to play with Josh (Nagy) the final day in the final grouping which meant a lot because he’s a really good golfer. I played pretty well that day and finished first in the u-17 and third overall which puts me at nationals which was really good. I come to Waskesiu which means a lot to me because it’s my home course and I’ve been here since I was three, that was probably one of the biggest tournaments I’ve ever won,” he said.

Swinnerton was the low qualifier for the match-play event. He defeated Luke Cote, Tommy Danielson, Adam Husli, and Will Blake on route to the Lobstick win. He said the format is different from stroke play and tests all aspects of your game.

“It’s a lot of fun but it can be pretty stressful at times if you are down a lot at the start you have to use your mental side to get back in it,” he said. “It works a lot on your game because if you get a triple-bogey you lose the hole and that’s it.”

His season results also gave him the under-19 OMT championship for the season with 2012.5 points, 37.5 ahead of Nagy. Swinnerton said the points were in the back of his mind but seeing he won was a nice feeling.

“I didn’t really think of it much this year because all of the great players under 19 and then suddenly I looked at the standings one day and I was first. I was pretty pumped, I did not think that was going to happen, but it worked out in my favour,” he said.

Swinnerton is now preparing for grade 11 but says he will find time to play if the weather allows. He said the itch to get better is stronger than ever and his focus consists on improving and a scholarship in the United States once he graduates.

You can hear more from Swinnerton who joined Golf Saskatchewan’s Clark Stork following the win.