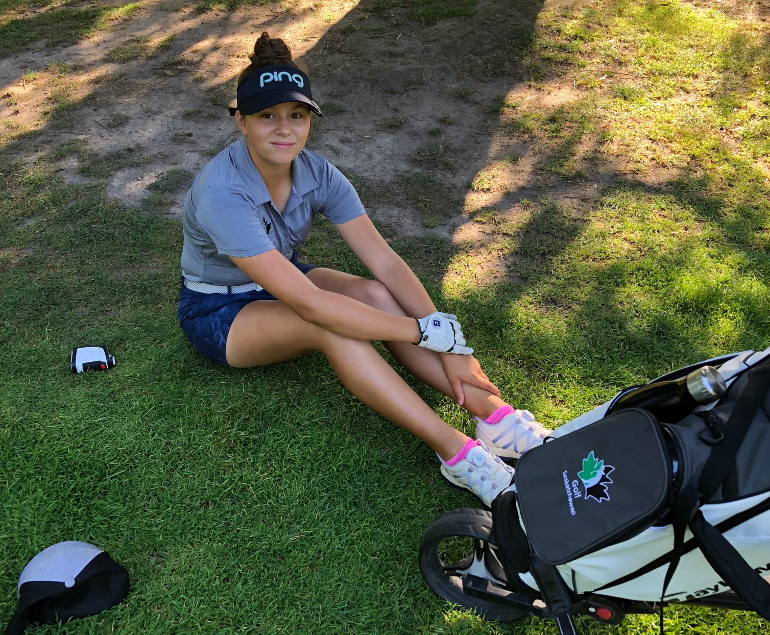 Yorkton’s Ella Kozak didn’t have the average summer for a 12-year-old.

The avid swimmer didn’t spend her days at the local pool or beach enjoying the water with her friends, her break from school was on the golf course. Kozak jumped into the world of competitive golf head first and the foray paid off. Rob Kozak, Ella’s dad caddied for her at the Saskatchewan Women’s Amateur Championship as well as the Canadian Amateur Women’s Championship. He said the season taught both him and Ella some lessons.

“The summer was incredible looking back on it now,” he told Golf Saskatchewan. “When we were in the moment it was pretty intimidating. Looking back now we are so thankful for that experience. For me I can’t wait to get back there because we have a better idea of what it’s like to compete at that level.”

Kozak played in 12 tournaments across the Golf Saskatchewan Order of Merit Tour (OMT), the Maple Leaf Junior Tour (MJT), and Future Links Tour. The highlight for her was the three weeks she spent in British Columbia. The national amateur was played at Marine Drive Golf Club in Vancouver and the Canadian Junior Girl’s Championship was in Tsawwassen, B.C.

“It was such a great experience for me,” she said. “I had so much stuff to learn. It was intimidating and I was nervous, but the tournaments were cool. I think I got used to it after a couple days.”

Kozak was edged by Saskatchewan junior girl’s champion Brooklin Fry in the OMT standings in the under-15 age category. She finished the year with three MJT wins in the same age group. She said overall, playing in a dozen competitive events increased her passion for the game.

“Yeah, I have become more interested in the tournaments. Knowing what’s going on, last year I was kind of just day dreaming. I’m into them now and I’m older and I think matured. I can understand what’s going on,” she said.

The Kozak’s also got to experience the professional side of women’s golf as well. The pair spent a day inside the ropes at the CP Women’s Open event in Regina late in August. Ella said watching the players was beneficial for her own game.

“It was cool to see the similarities and differences between the pros and me. How pros don’t hit every perfect shot, I need to understand that, I always found pros perfect. When I saw them play I was more interested with how they deal with their mistakes,” she said.

She didn’t get to see Brooke Henderson win the event and become the first Canadian to be victorious at the tournament since 1973. Kozak said she was very happy that she did pull off the win.

“It was cool to see her in person, I always see her on tv, but I was like wow, it’s Brooke Henderson. I am proud of her that she won. It was neat to see her and watch how she plays the game,” she said.

Saskatoon’s Anna Young was in the LPGA event making her debut. The five-time Saskatchewan champion didn’t make the cut at the CP Open. Despite her result, Kozak was cheering her on as well.

“I was rooting for her lots. She did really good, it was cool to see her and meet her. It was nice,” she said.

Kozak had another highlight of the summer, she hit her first career hole-in-one at an MJT event in Winnipeg as well.

She will play in the MJT National Champion in Phoenix, Arizona in November to wrap up the golf year. Kozak is a competitive swimmer in Yorkton so she will now return to the pool and the classroom until next season.

You can hear more from the Kozak’s who spoke to Golf Saskatchewan’s Clark Stork on Wednesday.