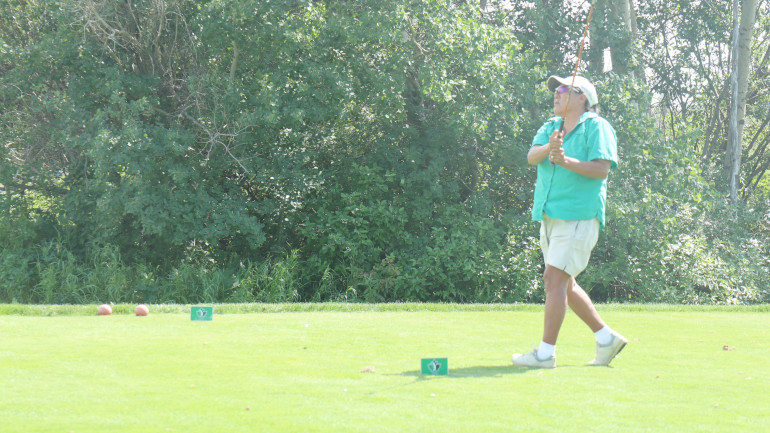 There is a new leader of the 57th Saskatchewan Senior Women’s Championship going into Thursday’s final round at Yorkton’s Deer Park Golf Course.

The Togo, Sask. product, and 2015 champion of the event has a two-shot lead over Rosetown’s Sue Skinner. Bezaire shot 6-over, 78 on Wednesday to leapfrog Skinner. She shot 14-over, 86 on Wednesday.

Three-time champion Jo-Anne Schiller of Lloydminster could be a factor on the final day as well, she sits four strokes back of the leader at plus-23.

The full leaderboard can be seen here. The final round begins at 8 a.m.

Yorkton’s Derek Stykalo, the Deer Park club champion, shot one of the three under par rounds of the day Wednesday to widen his lead on top the leaderboard of the third Saskatchewan Mid-Master’s (40 +) Championship.

After shooting an even par, 72 on day one of the event on his home course, the 40-year-old carded 2-under on both the front and back of his middle round giving himself a three-shot cushion going into Thursday’s final round.

Weyburn’s Rick Hallberg sits in second place after a great second round of his own shooting 4-under, 68. Hallberg sits at 1-under par for the event through 36 holes.

Meadow Lake’s Chris Reid is in the hunt at 2-over following a second round of 2-under, 70.

Doug Kreklewich of Melville is fourth, seven strokes off the lead.

The complete results can be found here. The final rounder will begin at 9 a.m. on Thursday.

Rick Hallberg has a big lead atop the leaderboard of the 101st Saskatchewan Senior Men’s Championship.

Sitting in a tie for second after round one, the Golf Kenosee member went low shooting 4-under, 68 on Wednesday opening an eight-shot lead over Saskatoon’s Warren Proctor. Proctor carded a 2-over, 74 in his second round of the three-round championship.

Day one leader Paul Grimes shot 7-over, 79 falling to third overall. Melville’s Bill Lummerding is fourth at plus-9, Cliff Selander of Prince Albert is fifth at 12-over.

The full results can be seen here. The final round of the championship begins at 9 a.m. Thursday.