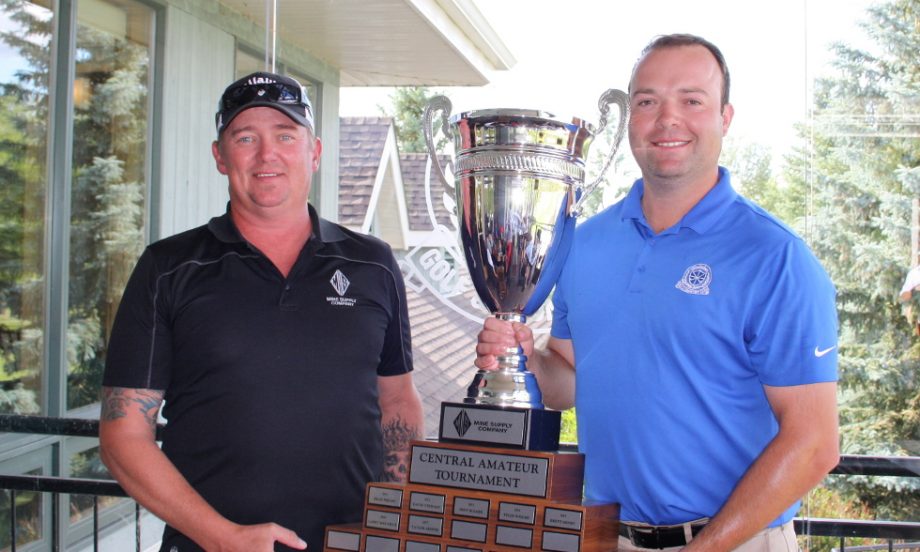 Jason Harley of Mine Supply Company presents Dave Stewart with the championship trophy on July 2.

Saskatoon’s Dave Stewart has his second men’s Order of Merit Tour (OMT) victory of the season after a seven-stroke win at the Mine Supply Central Amateur Championship over the Canada Day long weekend.

The Saskatoon Golf and Country member won the Scotia Wealth Open in Nipawin earlier this season as well. He said winning one of the top tournaments of the season is a great feeling.

“It’s one you try to win every year but the level of competition in the tournament is so high, there’s 30 to 40 guys in the field can win,” he told Golf Saskatchewan. “I am proud and excited to win among the field, especially at my home club.”

Stewart was tied with Publinx winner Carson Harcourt after two rounds but pulled away with a 69 in the third and final round on Monday. Despite being the lone golfer under par at -5, Stewart said the outcome wasn’t a foregone conclusion until the 50th hole.

“Last year I had a two-shot lead and lost the golf tournament,” he said.

Stewart had a two-stroke lead going into the final five holes, he said he was able to pick up some late shots.

“Carson had a bit of a miscue on 14 which allowed me to pick up a couple strokes. At that point I felt confident but there was still some work to do,” he said.

Stewart collects 750 points in the OMT standings race with the win, he now sits in second place behind Roman Timmerman. Harcourt is in third place. Stewart said the race is close heading into the final five events.

“At the end of the year winning the OMT shows the most consistent year in terms of performance. Roman and myself will both be playing the Amateur, so I want to ensure I am maximizing the points, so I don’t have to scramble and play a few extra events,” Stewart said.

The 107th Saskatchewan Men’s Amateur Championship is from July 17 to 19 at Dakota Dunes.

On the senior side at the Mine Supply Central Murray Eddy was victorious.

The event was Eddy’s first OMT of the season, he picks up 750 OMT points as well. That leaves Eddy in sixth place in the standings. Lionel Fauchoux tied for fifth place in the event, the Moon Lake member leads the OMT standings with seven events left to play.

The Mercator Financial South West Senior Men’s Championship is next on the tour. That will take place at the Elmwood Golf and Country Club in Swift Current from July 9 to 11.

You can catch up on the complete results of a busy weekend of golf in the province here.