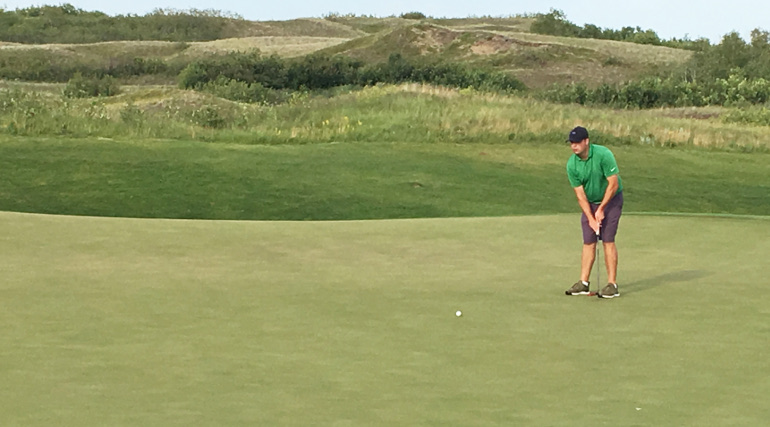 Saskatoon's David Stewart leads the men's Order of Merit standings with a pair of events left.

The second round of the provincial Men’s Amateur and Mid-Amateur Championships didn’t start well for David Stewart but the result is still the same, the top of the leaderboard.

Stewart, 32, mishit his opening drive on hole one at the Dakota Dunes Golf Links Wednesday but managed to save par assisting in the Saskatoon resident’s four-stroke lead going into the third and final round of the tournament. Stewart carded a trio of birdies and one bogey on the front nine, the Saskatoon Golf and Country Club member picked up another pair of birdies on the final nine holes to finish with a three-under, 69. He had a one-shot lead over Roman Timmerman going into round two after firing a 68 on opening day. Timmerman, 19, now sits tied for second place, four shots back along with Yorkton’s Kade Johnson. Johnson had the day’s low round at 66, combining that with Tuesday’s 75, the Deer Park Golf Municipal Golf Course member and Timmerman sit at 141.

Jehremy Ryde of Eston also made up ground during round two, he posted a two-under 70, dropping his overall score to 142, five back of Stewart. Prince Albert’s Danny Klughart is tied with Ryde in fourth place.

Six golfers are tied for sixth position at 143; Dan Lambert, Scott Thompson, Mitchell Matichuk, Mike Herperger, Liam Courtney, and Justin Wood are all in the running for the championship that will conclude Thursday.

The tournaments top three players will represent the province at nationals, as well as an alternate.

The complete results of both the Amateur and Mid-Amateur Championships can be found here.