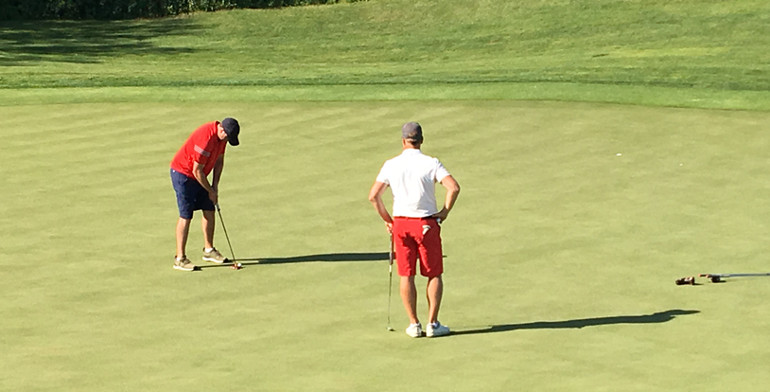 The two-time Saskatchewan Order of Merit Tour (OMT) winner this season sits a stroke better than Roman Timmerman in the Men’s Amateur Championship and a pair of shots ahead of Jim Born in the Mid-Amateur (25 years-old and up) after the first of three rounds at Dakota Dunes Golf Links.

Stewart, 32, carded one birdie on the front nine and eight pars, the scorching heat didn’t slow down the Saskatoon Golf and Country Club member on the back nine. He birdied hole 10, hit a bogey on number 12 before rattling off birdies in three of the final four holes to finish with a four-under, 68.

Timmerman, 19, also has two victories on the OMT this season. The Riverside Country Club golfer was the early leader with a one-under, 71 before Stewart verified his card at the scorer’s table. Like Stewart, Timmerman was one-under on the front nine. He picked up an eagle on hole 16, that was followed by a bogey and a birdie to cap his round.

Born, who plays out of the Lloydminster Golf and Country Club is tied for third place with Saskatoon’s Marc Sweeney at two-under, 70. Behind the top three sits five golfers tied at 71, nine competitors are tied for 10th place at even-par 72.

Players entered either the Amateur Championship, or the Mid-Amateur; or they can compete for both titles. A complete list of the leaderboards can be seen here.

The first of 42 groups will tee-off at 7:06 a.m. Wednesday for the second round of the 54-hole tournament.