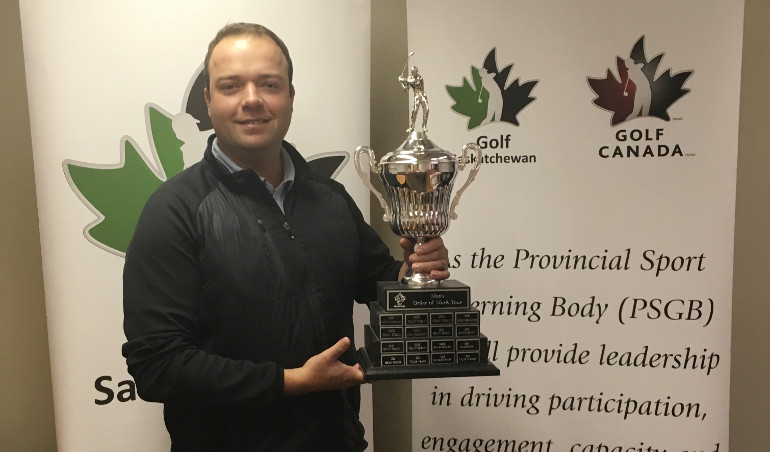 Dave Stewart is the men's Order of Merit champion for the third time.

The third time is the charm for David Stewart.

The Saskatoon Golf and Country Club member is the 2018 men’s Order of Merit (OMT) champion. Stewart won the tour title in both 2013 and 2015 as well. He said winning the OMT race was a goal of his going into the season.

“I didn’t feel like a had I tonne of ups and downs this season, it was consistently fairly strong,” Stewart told Golf Saskatchewan. “I felt this year I had the ability to be in contention every week which sort of made this year more fun than past years.”

Stewart started the year strong with a win at the Scotia Wealth Open in Nipawin. The long-sought win was worth 500 OMT points. Stewart placed fourth at the Great Western Brewing Saskatoon Amateur collecting 412.5 points. He won the Mine Supply Central gaining another 750 points. He picked up 700 for a third-place finish at the Saskatchewan Men’s Amateur Championship and another 700 for his second-place ranking at the provincial Mid-Amateur Championship. He said he was pushed in every event he played this season adding to the victory.

“The strength of the field and the competition has gone up. A lot of the young guys are going to college now and some of the mid-am’s are playing some very good golf and I’m humbled to win the OMT for sure,” he said.

Stewart was 630 points ahead of Roman Timmerman and just under 800 ahead of Kade Johnson, both of those players attend Southern Arkansas University. The 32-year-old said he feels being a leader on the course is as important as winning events.

“If I can help the young guys to play tournaments and stay in competitive golf and give back to the next generation I feel like I’ve done my job,” he said. “I always looked up to my dad, Colin Coben, guys like John Walsh, the list goes on, those were my mentors growing up. I just hope that I can maintain a sense of character and help them strive to take amateur golf past their 20’s.”

Stewart represented Saskatchewan at both the national amateur and mid-amateur championships in British Columbia this year. He said he was able to share the mid-am with his wife who was his caddy and the Victoria Golf Club was a bucket list course. Stewart said he will work to get back to both championships next year and wants to stay competitive on the course.

“Hopefully next year if I can allocate the time I’d like to play both events again and play a full schedule. My goal is to continue to compete among the best golfers in the province and play as long as I can at a high level. I don’t know how many years I have left but I won’t take it for granted that’s for sure,” he said.

You can see the complete men’s OMT rankings here.