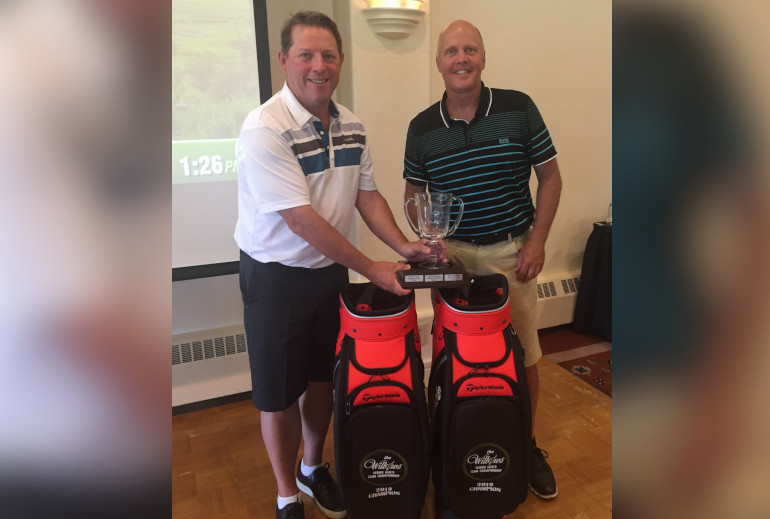 Back on July 9 and 10, Riverside Country Club players Don Steele and Warren Campbell went low to hold off a field of over 30 teams to win the Willows Senior Team championship.

Steele and Campbell carded rounds of 65 and 66 to edge Frank Enns and Colin Coben by just one stroke. Enns and Coben were tied for the day one lead but their round of 67 during the second round was a stroke back.

Taking third in the event was the team out of the Legends Golf Course of George Janson and Ian Larocque. They were another shot back at 133.

John Walsh and Rick Hillestad, both Riverside members placed fourth at 137, rounding out the top five was the twosome of Chuck Hainsworth and Keith Silvernagle with a score of 139.

Steele and Campbell collect 250 Senior Men’s Order of Merit Tour (OMT) points each for the win. Enns and Coben pick up 200 each, Janson and Larocque earned 175 points each. 150 OMT points were awarded to Walsh and Hillestad. Hainsworth and Silvernagle collected 125 each.

Reigning Saskatchewan senior men’s OMT champion and provincial title holder Rick Hallberg was victorious. The Weyburn product, who calls Golf Kenosee home ran away from the field shooting 222 (73, 73, 76), six-over. Hallberg picked up 750 OMT points for the win to pad his lead atop the standings. He has 2,650 points through five events.

Warren Proctor of Saskatoon placed second behind Hallberg with a score of 229. The member at Saskatoon Golf and Country Club earned himself 600 OMT points for the second-place finish. Proctor sits in third position in the rankings behind Coben.

Swift Current’s Keith Miyashiro used home field advantage to secure a third-place finish at the tournament with a score of 231. Rod Grose, also an Elmwood member stroked a three-round total of 234 to place fourth. Finishing in the top-five was Regina’s Jody Lehmann and Kevin Vollet of Indian Head, they tied with scores of 238.

The complete results of both events and the OMT standings can be found here.

Next up for the senior men’s circuit is the Regina Dental Group South Saskatchewan Senior Men’s Championship at Deer Valley on July 22 and 23.

On July 15 and 16 the Joanne Goulet Golf Course hosted the Regina Ladies Open.

Golf Sask. public player, Crystal Piero took the championship with a plus-10, 142. Piero was three strokes better than Wascana Country Club member Kim Walker who went 70, 75 over the two days.

Autumn Neiszner continues her incredible season with a third place showing at plus-20.

Reigning Saskatchewan senior women’s champion Lorie Boyle finished in fourth spot, Denise Wilson, who plays out of the Elmwood carded a plus-24, 156 to round out the top-five.

Saskatoon’s Abra Thompson finished sixth in the event, she earned 200 OMT points for the performance pushing herself into third on the women’s OMT leaderboard. Neiszner is in fifth in the standings.

The complete results of the tournament and the OMT race can all be found here.

The Pharmasave Ladies Open is the next tournament on the schedule, that takes place in Weyburn on July 27.