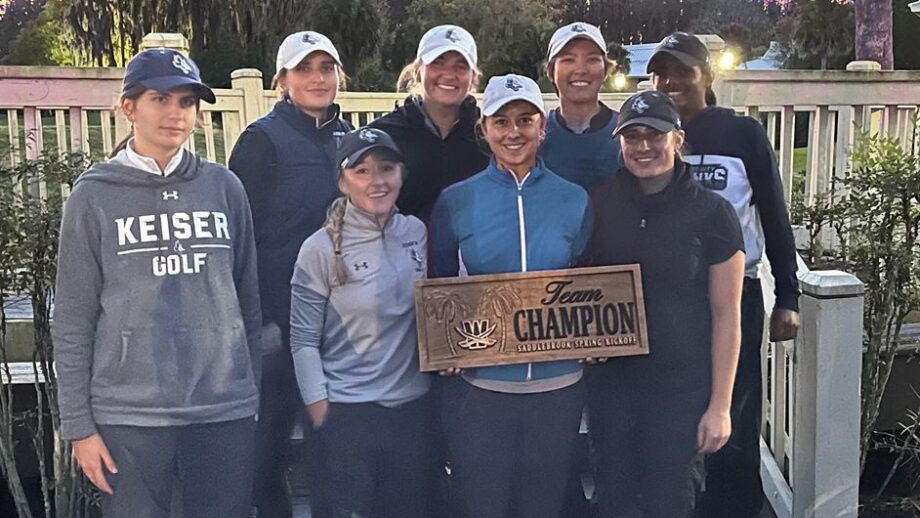 Autumn Neiszner (front-right) competed in her second collegiate golf event as an individual over the weekend while her teammates took the overall championship. Photo-www.kuseahawks.com
Clark Stork

Autumn Neiszner put together a strong showing in her second collegiate event. The Keiser University freshman competed as an individual in the Saddlebrook Spring Kickoff in Wesley Chapel, Florida on March 11 and 12. The Regina-born golfer shot 77, 79, and 78 for an impressive 54-hole score of 20-over, 234. She was tied for 12th overall.

The Seahawks team won their fifth event of the season at the event. Next up for their team is a one-day event against Harvard University on St. Patrick’s Day.

Alex Schmidt had another strong showing for Lewis-Clark State this week. Just wrapping up Wednesday evening, the Regina golfer shot back-to-back 83’s for a 36-hole total of 166. The senior for the Warriors placed all alone in 14th.

The team finished in fourth place in the event eight shots back of Embry Riddle – AZ. Next up for Lewis-Clark an event in Walla Walla, Washington on March 29 and 29.

The Chaplin product shot 103 in round one but rebounded in the second round and shot 87. Knudsen placed 34th at 46-over par. The Beavers finished in fifth as a team. They are back on the course in two weeks at the Midwest Intercollegiate in Bolivar, Montana.

Roman Timmerman continues to impress in his senior year at Southern Arkansas University (SAU). The Saskatoon product carded rounds of 70, 71, and 74 this week at the Oak Tree Invitational in Edmond, Oklahoma. Timmerman’s 54-hole score of 5-over, 215 tied him for fourth place.

As a team the Muleriders struggled finishing 13th out of 14 schools. Their next tournament is the SAU home event in El Dorado, Arkansas on March 21 and 22. The spring season’s regular schedule for Timmerman is the Great American Conference Championships from April 10 – 12.

Brody Istace of Kindersley traveled to Gainesville, Georgia for the Golden Tiger Invitational on March 14 -15. The senior at Columbia International University shot 79 and 83 at Chattahoochee Golf Club, he tied for 37th at 18-over par.

The Rams were ninth in the team competition. Their next action is the Monument Golf Oldfield Classic in Okatie, South Carolina on March 27 to 29.