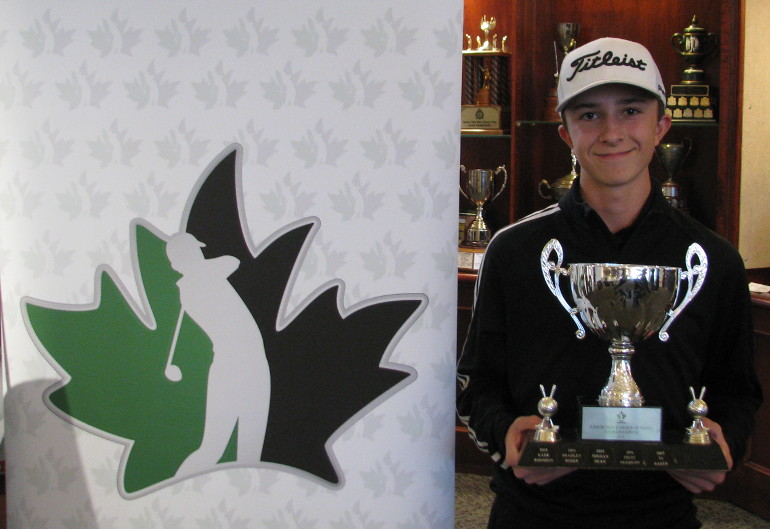 Will Blake is the under-15 provincial champion.

Will Blake has capped his under-15 boys’ provincial championship with an Order of Merit (OMT) title.

Blake earned 600 OMT points for the win at the junior championship. Overall the 14-year-old played eight OMT sanctioned events between Golf Saskatchewan and the Maple Leaf Junior Tour (MJT). Taking the allowed top five performances Blake accumulated 1,360 OMT points. He said his performance at Moon Lake was a highlight of the summer.

“I’d say winning provincials was a huge highlight. It’s a big tournament and I was happy with that,” Blake said.

Blake, who has competed in tournaments since he was 12 years old won the Regina City Junior and two MJT events in his age group. He will advance into the under-19 age group next year. Blake said he’s looking forward to the challenge of competing against the likes of OMT under-19 champion Josh Nagy and runner-up Brad Moser.

“I need to play more consistently, I had a lot of good first rounds this year and not a lot of my best efforts in the second round. I think if I can gather or two rounds I can compete with them,” he said.

Blake will turn his focus to the volleyball court as part of the Martin Collegiate team, he also plays for the AA midget Regina Rangers. While keeping busy with other sports Blake expects to reach golf simulators a couple times a month over the winter. He said with three years of junior eligibility left he’s focused on a national appearance.

“That’s my ultimate goal, that’s the one tournament I want to play in as a junior,” he said.

You can see more details regarding the u-15 OMT standings here.