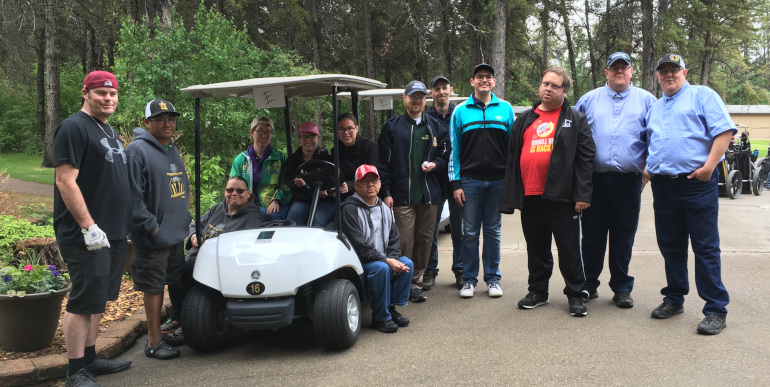 Special Olympic athletes had their annual golf tournament in Nipawin on June 15.

Beginning in May of each year the Nipawin Special Olympics group runs a six week long golf program that culminates with a tournament on the Saturday prior to Father’s Day at the Evergreen Golf Course.

Betty Blue has been working with the Special O organization for over 25 years and said the once a week golfing program is very exciting to the athletes.

“They absolutely love golfing, they really do,” Blue remarked to Golf Saskatchewan this week. “I thinks it is getting more popular all the time for Special Olympians. They also get to see new faces and make new friends.”

The program includes weekly lessons at the course over the six-week period for the local players. One participant even travels to Nipawin from Tisdale to take part. During the tournament, fun is the key basis. The more developed athletes will play nine holes, the beginners play a best ball format and get through as many holes as possible, this year they played four which was an improvement from the year prior.

The event ends off with an award ceremony with medals and prizes. The Spot at the Evergreen catered a meal for the group as well which is also a highlight according to Blue.

“We try to have a meal that they don’t get at home because they all cook for themselves, so we go for something extraordinary,” she said.

All in all the program was another success this year and Blue said they will be back for another year. She added the work put in by volunteers, staff and the participants makes the event a memorable one each year on the calendar.

“I think it’s a great program,” she beamed. “I’d like to thank Derek (Tallon) at the Evergreen. He gives us so much stuff, he allows us to use his stuff clubs and carts. I think the main thing is everything went well, and everyone enjoys it.”