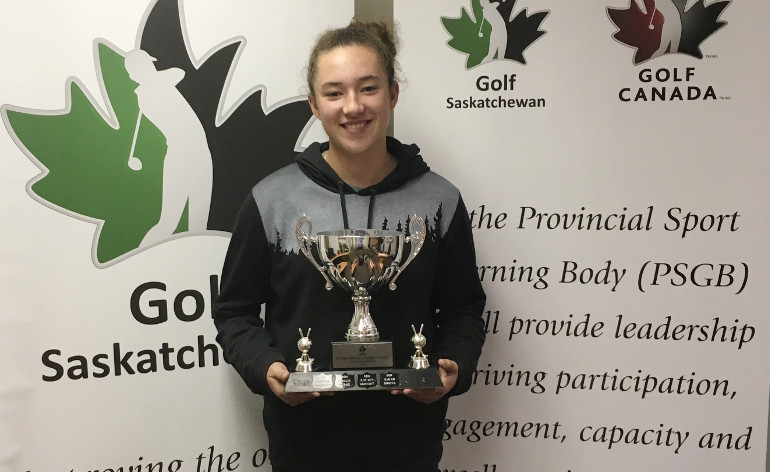 Brooklin Fry is the under-15 girls Order of Merit champion.

Fry competed in four OMT regulated events this season winning all of them. Three of the tournaments were Maple Leaf Junior Tour (MJT) events, the other was the Saskatchewan Junior Women Championship. Fry has been competing on the MJT for a couple seasons but admits she never expected to win all her competitions at such a young age.

“It definitely did surprise me a bit, I wasn’t aiming to win all the events I entered but it is really awesome,” she said.

She won the under-15 girl’s division at the MJT event in Lloydminster earning 200 OMT points. Her MJT win in North Battleford was also worth 200 points, the MJT tournament she won in Saskatoon was also 200 points. Winning the junior women championship was worth 2000 points on the OMT tour. Fry finished with 1,600 points, 65 more than Yorkton’s Ella Kozak. She said winning the tour race was a special feeling.

“It was really awesome, it was a really good feeling. I was also surprised I won it. I wasn’t aiming to win it, I was just taking the season one shot at a time and working my way up,” Fry said.

Winning the junior championship earned Fry a trip to British Columbia to represent the province at nationals. She said the trip and tournament was a highlight of her summer.

“It was really fun, it was a privilege to represent Saskatchewan there. It was a blast,” she said.

Fry has hung up her clubs for the time being. She will now turn her focus to hockey for the winter. She said she does make trips into Saskatoon to the Golf Dome a couple times over the winter and hopes to do that again. Fry said having such a strong season has her eyeing even more success going forward.

“I can’t wait to see what I can do in the future. I think I have a pretty good future if I continue to work at it,” she said.

You can see all the junior OMT standings here.