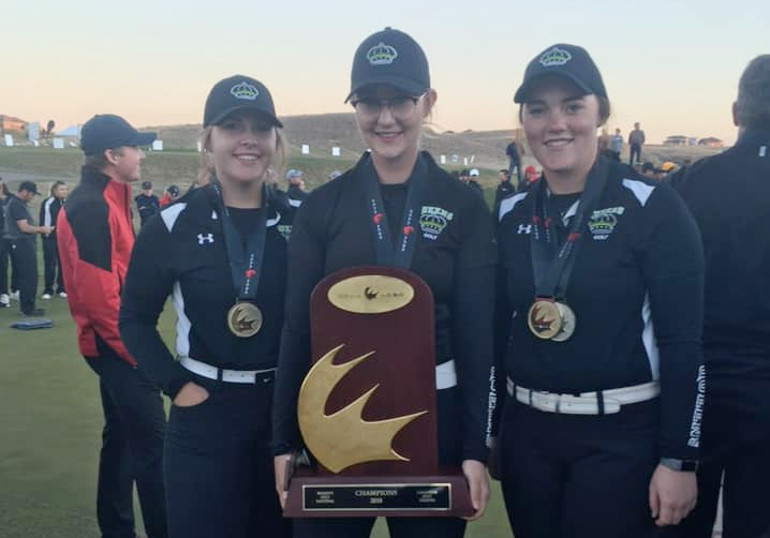 Melville’s Chloe Sies capped her first year of collegiate golf with a personal best score in competitive play and a Canadian championship.

The two-time Saskatchewan junior women’s champion and the Red Deer Queens claimed the Canadian Collegiate Athletic Association (CCAA) title on Oct. 19 at Desert Blume Golf Club in Medicine Hat, Alta. The Queens earned a birth to nationals after placing second as a team in the provincial event they hosted a couple weeks ago. During the first of four rounds at the Canadian event Sies, 19, shot an 87. The weather improved for the rest of the tournament and so did Sies’ scores leading to a 75 in the final 18 holes. She said playing the best round of her life came at the right time.

“I shot a 76 at the Woodlawn in Estevan a couple years and I haven’t been able to break that, but I finally did. It felt great,” she said.

Sies said the wind gusted upwards of 60 kilometres and hour during the first round, she didn’t blame the elements for the slow start but admitted the changing conditions helped lower all the scores.

“All four rounds could have been better of course,” she said. “It got progressively better, I was able to wear shorts one day. The weather was super nice the last three days.”

Her four-round total of 323 was good enough for sixth overall in the 24-player field. Sies finished 25 strokes back of champion Emily Romancew of the John Abbott Islanders. As a team, the Queens ran away with the gold medals finishing 24 shots better than the second-place Medicine Hat Rattlers. The championship is the first for the Red Deer school in the Alberta Collegiate Athletic Conference (ACAC). Sies said the reality of a national title is starting to sink in.

“It’s taking a while to sink in for us, we couldn’t really believe it,” she laughed. “It’s been surreal for the last couple days, now it’s starting to sink in, people are starting to say congratulations in the hallways. It’s starting to get more real.”

That concludes Sies rookie college season. She won her first tournament earlier this fall and placed second at the Saskatchewan Women’s Amateur Champion this summer. She said the central Alberta courses are still open for a couple days so she hopers to play a couple more rounds. The college has indoor hitting nets for the athletes to continue to work at their game over winter. The team will travel to British Columbia for a camp in March to prepare for next season.