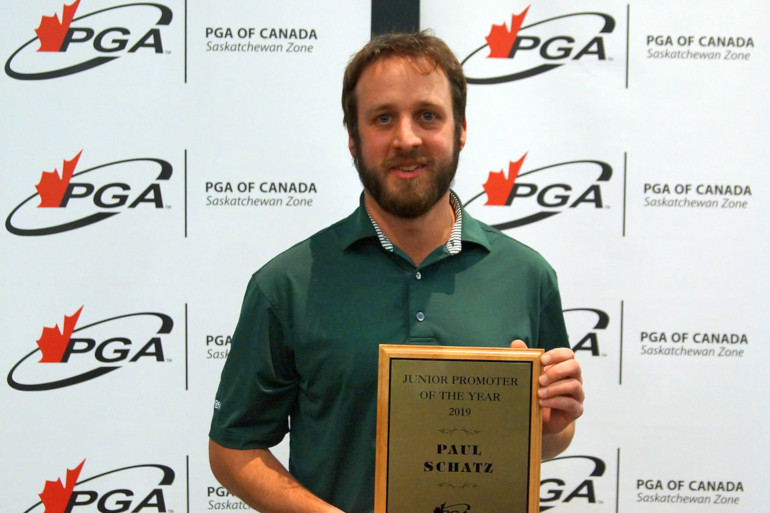 Paul Schatz is being recognized for his junior golf programs.

Regina’s Paul Schatz has done an impressive job of revitalizing junior golf in Regina and the PGA of Canada is awarding him for his efforts.

Schatz, 31, got his start in golf at the Tor Hill and Murray Golf Courses just outside Regina when he was about seven years old. He would also play at the Lakeview Par-3 and Sherwood Forest courses with his family, but the Western Golf Management operated courses of Murray and Tor Hill have been Schatz’s second home for over two decades. He got his first membership at the clubs when he was about 10, started working at the Murray when he was 14 and stayed there until five years ago.

Schatz took the position of head professional at Long Creek in Avonlea and spent fours years there, that’s where his passion for junior golf and growing the game took off. The town about 30 minutes south of Regina had two junior members when he arrived, after four years the club had about 30. He started a weekly league and lessons gaining the attention of about 40 local kids.

Schatz was enticed back to Tor Hill when long-time pro Scott Knapp retired, Kevin Dietz brought Schatz back into the fold and now Regina’s junior golf scene is up-and-coming. Upon returning to the Queen City, Schatz reached out to Lois Herridge, the wife of the late golf pro Brad Herridge, using her role as superintendent of the Regina School Board to get golf into schools. Schatz purchased $5,000 of Starting New At Golf (SNAG) equipment, launched Regina Junior Golf Incorporated and has been increasing junior numbers across Regina ever since.

“There wasn’t much going on in the city with junior golf and it was a place for me to make a living,” he told Golf Saskatchewan about why he gives back. “It’s a lot easier to make a living when you enjoy teaching kids. Whether it’s golf or school, or whatever, when you see a kid or even an adult accomplish something that they’ve been working hard at, the joy on their face, you don’t get that from working in the proshop. I’d much rather make my living teaching junior lessons than running budgets behind a proshop desk, it’s much more enjoyable.”

Schatz has worked with five different Regina schools, with the assistance from four other local pros in bringing family golf in school nights. Some events have had upwards of 150 attendees working with the SNAG equipment. The event works with kids on putting, chipping, full swings, fitness, and proshop etiquette. He also holds learn to golf clinics at courses across Regina in the spring with almost 100 kids taking part this past year. Schatz also had a one-night a week junior league at Tor Hill where the kids got a meal in the clubhouse before playing a round of golf which assisted in focusing on the social aspect of the game. His work was recognized by the PGA of Saskatchewan where he was honoured with the Junior Leader of the Year award and Bill Taylor Award recognizing sportsmanship.

“The Bill Taylor trophy was a mass vote by our peers which to me was huge honour,” Schatz said. “You don’t get chosen by your peers very often in a lifetime. Looking at the names on that one, it’s kind of everyone who has helped me in my golf career.”

Schatz’s provincial honours in 2019 propelled him to be nominated for the Jack McLaughlin Junior Leader of the Year Award which he won. He was nominated against pros from seven other provinces. Schatz was announced the winner via Facebook live on Dec. 12. He said winning on a Canada wide level was a great feeling both personally and his Saskatchewan peers.

“For me it was super cool and awesome,” he said. “I don’t know what the people I was nominated against did personally so I can’t speak for their programs, but it shows programs in Saskatchewan can compete nationally. Amanda (Minchin) has won the award before, Jeff (Chambers) has won the award before. There is good things that come out of Saskatchewan and it makes me proud to be a part of the zone and the community here.”

Schatz has also done some work with the Gabriel Dumont Institute in Regina focusing on First Nations programming where he taught physical education to the students and teachers at the facility. He’s also excited to announce the Maple Leaf Junior Golf Tour will make a stop at Tor Hill for an event in 2020 as well.

Coming from a giving family (Schatz’s mom was a registered nurse for 25 years and now works at Tor Hill, his father is a long time member of the Knights of Columbus, plus they operate a fun hockey league in Regina for kids five and under that has grown to 32 teams from six under his parent’s guidance) Schatz credits much of his success to his upbringing. He insists that he couldn’t have received this recognition without plenty of help along the way.

“As much as I did a lot it was a whole bunch of people helping me. The other golf pros with guidance, from Amanda, to Jeff, Jason Schneider, Evan Lang, Brad Lovatt, Sam Willis, my competitors on the course and in business all came out to help something we believed in. That’s something you don’t see anywhere else. I also want to thank my volunteers and my sponsors, it’s a team effort,” Schatz said.

The man known among his peers as “Booger” termed years ago by 2019 Sask. PGA Head Professional of the Year, Gus Vogalsang, will receive his award at the PGA Buying Show in Orlando, Florida in January.