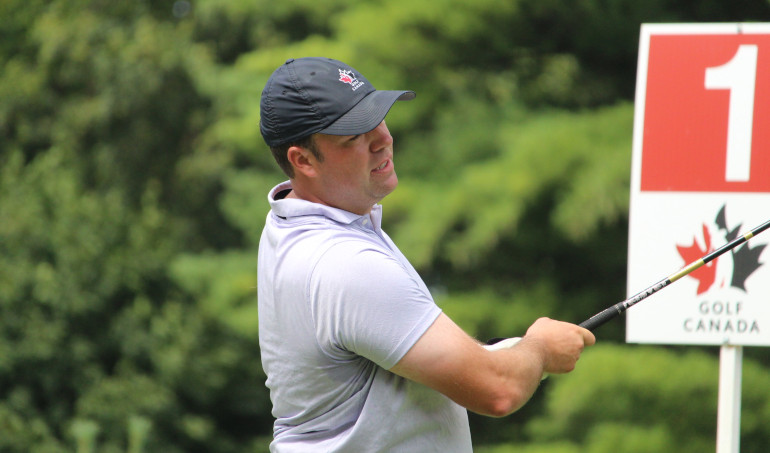 With some time to recollect, the Canadian Mid-Amateur Championship at Summit Golf Club in Toronto was a successful tournament for Saskatchewan golf.

Five of the 12 local competitors made the cut at the national championship and as team Saskatchewan finished fourth overall, just one stroke behind British Columbia for a medal spot. Provincial mid-amateur champion Danny Klughart was the high Saskatchewan player finishing tied for 17th. The Cooke Municipal Golf Course member said a little lower score would have been nice, but his placement was satisfactory.

“I would have liked to stayed in the top-10 after the first couple days but I had a bad stretch during the third round, I couldn’t get off the bogey train,” he said. “Overall it was pretty good, I was happy.”

Klughart won both the Saskatchewan amateur and mid-amateur championships allowing him to represent the province at both national events. He didn’t make the cut at the Canadian Amateur Championship in Nova Scotia. Admittedly the two events are outlined for different players and the points of their amateur careers.

“Goal one is you want to play but I felt like the mid is something I felt I can compete and be in the top ten. It’s a smaller field and you don’t have as many college players. Most of the guys in the mid-am have jobs and are in my situation. I guess you feel more comfortable playing in the mid-am (25 years +),” Klughart said.

The national championship concludes the Order of Merit (OMT) schedule for Klughart as well, he’s going to play a couple club events before the season closes but the Prince Albert product has put together an unstoppable season. He will walk away with the men’s OMT trophy by a large margin. Klughart said he’s worked hard all year to improve his game and the win feels great.

“I had lots of success this year, I think I won four times, so I have to be happy with that,” he said. “The way I played all summer, it was very consistent. I focused on weaknesses even at the start of summer, I addressed them and got better. They are in the best place they’ve been all summer, so I feel I’ve accomplished something that way.”

Despite not being part of Team Sask. David Stewart is proud of the fourth-place finish for the group. The 2018 men’s OMT champion was in Toronto with an exemption position, the Saskatoon Golf and Country Club (SGCC) member finished the national event in a tie for 32nd at plus-18. Stewart said overall the province’s showing was very positive.

“I thought we were really close to being one of the better teams this year,” he told Golf Saskatchewan. “It’s hard to be consistent over 72 holes without making any boneheaded mistakes like everyone does. I think all in all we showed ourselves well, guys were professional. The course stood the test, it was tough.”

Admittedly Stewart didn’t have a typical year results wise, he will finish in the range of 14th overall in the OMT standings. He said the Saskatchewan Amateur and Mid-Am Championships at his home course didn’t go his way, but the national event result relieved some sting from the season.

“First and foremost the provincial championships were disappointing for me especially at my home course to not play like I felt I could at my ability,” the two-time Sask. amateur champion said. “From time to time that happens, life gets in the way and you don’t have the time to prepare like you normally would. It wasn’t from a lack of trying or want, it’s just a funny game sometimes and it doesn’t work out the way you want but, 32nd at a national championship, I will take it.”

Stewart said he is going to try and balance his family, work and life more accordingly over the offseason to me more prepared for the 2020 amateur season. He said players have to if they want to compete with the likes of Klughart which is good for Saskatchewan golf.

“He definitely set the bar at a different level so hopefully that motivates guys to use the time they have to prepare as well as they can and next year the competition goes up a level,” Stewart said.