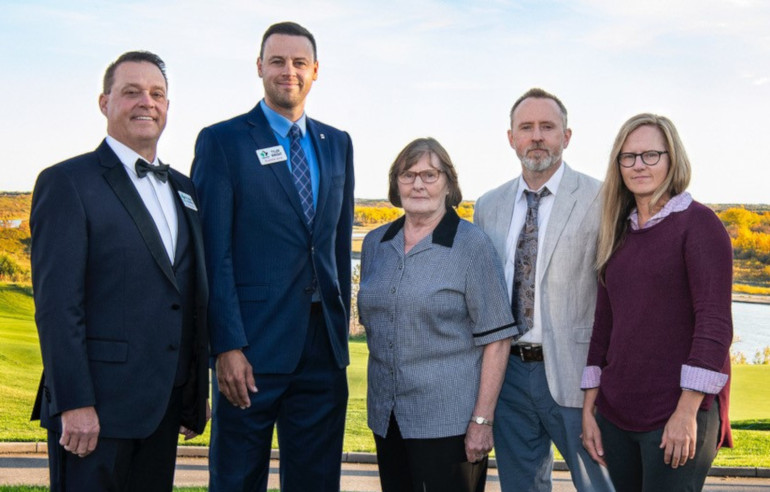 It was a marvelous night at Riverside Country Club on Saturday as the Saskatchewan Golf Hall of Fame welcomed three new members.

Tyler Wright, Dr. Randy Gilewich, and Gary Brandon made up the 2019 class that grows the Hall to 53 individual inductees and four teams.

Brandon was the lone inductee enshrined posthumously, he was represented by his wife, Bonnie, and children Skye and Bobbi. Skye said the evening was emotional but memorable.

“It was, there was an element of not sure how to proceed at the same time too, you know our dad, in the case of our mother, her husband is being inducted posthumously so, you never know how much to speak, how much not to speak, how many friendly faces are you going to see? It turned out quite a few, it was a great revisiting of friends and to have that respect shown to our dad was fantastic,” he said after the gala dinner.

Gary succumbed to cancer in 2009. Golf was his profession, but he excelled at many different sports and is inducted into several Hall of Fames. Skye said had he been able to attend Saturday’s event he would have been very proud.

“He would have been blown away,” Skye said. “He was always about community, when we were growing up in Melfort when he was the pro there and then again when he moved to Dauphin he always showed so much support to businesses in town because he knew those were the people that were going to support his course and golf there. To see the golf community at large recognize him back would have meant a great deal. I think he would have been overwhelmed.”

The ninth Hall of Fame banquet was attended by over 70 people. Many of the people in attendance were mentioned during all three inductees speaking at the podium. Skye said that proves how tightknit the golf world is in Saskatchewan.

An amateur career that has spanned four decades, Dr. Randy Gilewich was inducted on Saturday. A lifelong Wascana Country Club member shared the evening with family, friends, and employees of his dentistry business in Regina. Gilewich said the event exceeded his expectations.

“The whole night has been fantastic, better than one could have expected,” he said. “All the support from friends and family, reliving a lot of the memories, and hearing all the stories. The night for me has been fantastic.”

Gilewich and Wright rented a charter bus from the Queen City to transport their attendees to the event in Saskatoon. Not everyone he wished to be in attendance could make it, but he said the support he received was special.

“I had girls from work, friends from all over the place, my mom and my kids, that was very special. My dad, like I said who passed away years ago, he’d be so proud for this night. It really amplifies the value of it that they’re supporting you. To have the support from everybody in an individual sport is remarkable,” he said.

“It’s truly an honour, a privilege to be accepted into the Hall, this is the highest honour bestowed upon us. I will cherish it forever,” he concluded.

Gilewich will be inducted into the Wascana Hall of Fame later this year.

His biography can be seen here.

Regina’s Tyler Wright is just 40 years old and became the youngest inductee in the history of the Hall.

Winning his first tournament at the age of 12 success has followed him all the way to a 2019 Mid-Masters (40 +) provincial championship at the Royal Regina Golf Club, his first course he had a membership as a junior. Much like the other two speakers, Wright said the evening was one he won’t forget.

“It’s surreal, it’s phenomenally special to be able to spend this opportunity with my family, friends, the mentors that have came out, it’s overwhelming and I think my speech reflected that. I tried to keep it together but it’s tough when you have an opportunity to thank those people who have impacted your life so significantly. To do it in a public forum it’s emotional, it’s been an emotional overwhelming night but, what a special night,” he said.

When Wright first spoke about the induction he credited his Grandpa Louie and his love for the game being passed down to him. Louie has since passed away and was mentioned by Wright in his speech. He said he was with him along the way.

“My grandpa was a big joker, he’d be celebrating, he would be smiling, he’d be keeping us loose and laughing. He was here,” Wright smiled.

Being so young with likely many more national appearances and championships to come Wright will become a mentor for young golfers. He’s a teacher and vice-principal so leadership follows him. He said that may not have been the case without his golf mentors including Gilewich.

“We had some really quality golfers at the Regina when I started as a kid, there is a long list there,” he explained. “We had a strong list at the Wascana including Randy and Tom McNall (inducted in 2017) and I always looked up to those guys, I wanted to emulate them. I watched them play when I had an opportunity, it’s just really special. Randy and I are tied deeply, my wife has worked for him for 17 years now. Anytime you can experience something with someone you’ve looked up to as a leader and mentor I think it makes it that much more special.”

Wright will also be added to the Wascana Hall of Fame with Gilewich later this year.

His biography can be found here.

His interview is below.