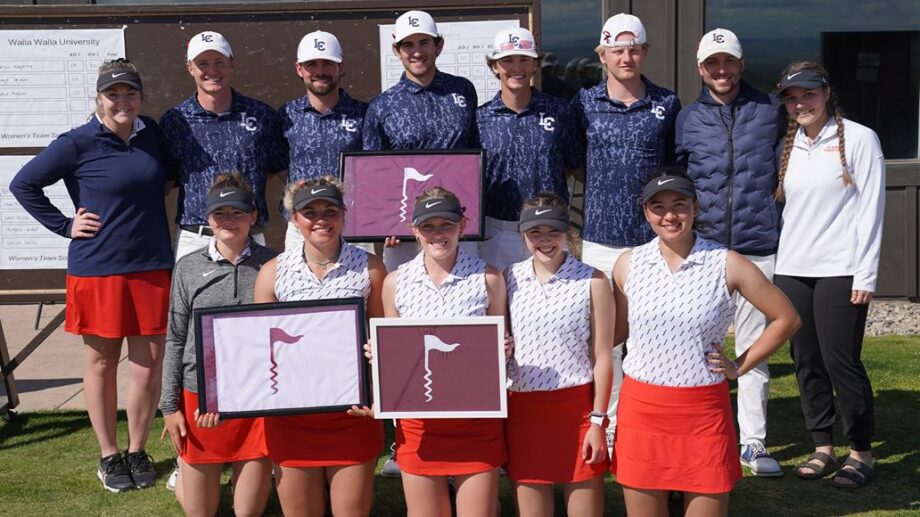 It was a winning week for Regina's Alex Schmidt (front-left) and her Lewis-Clark State teammates on the golf course in Washington. Photo credit/www.lcwarriors.com
Clark Stork

Another week and another long list of Saskatchewan student-athletes competing across America for their selected colleges.

Alex Schmidt helped lead the Lewis-Clark State Warriors to a team win at the Walla Walla University Wine Valley Invitational on Tuesday. The win was the first for the team this season.

Schmidt tied for 16th at the event with a 36-hole score of 171 (87, 84). The Regina products teammate Deana Caruso won the tournament at the Wine Valley Golf Course.

Next up for Lewis-Clark is the Corban Invitational in Klamath Falls, Oregon on April 11 and 12.

A trio of Saskatchewan players were on the course in Heber Springs, Arkansas for the Natural State Golf Classic on March 28 and 29.

Roman Timmerman of Saskatoon was competing for the Southern Arkansas Muleriders at the event, the senior was the top local finishing in a tie for ninth at even par. Timmerman shot 70 and 72 at the Red Apple Inn and Country Club.

Prince Albert’s TJ Baker and teammate Chase Gedak of Estevan were also at the tournament competing for the University of Arkansas at Monticello. Baker carded rounds of 76 and 73 placing in a tie for 30th at 7-over par. Gedak tied for 47th at 13-over par with rounds of 77 and 78.

The Muleriders were fifth as a team, the Weevils placed 10th.

Timmerman’s next action is the Great American Conference Championships from April 10 to 12 in Hot Springs, Arkansas. Baker and Gedak will now prepare for the DBU Classic on April 4 and 5 prior to the conference championships.

The Kindersley product put rounds together of 76, 84, and 79 at the Monument Golf Oldfield Classic to finish at 23-over par and in 44th spot. AS the team the Rams were 10th.

The team will travel to Greenville, South Carolina on April 4 for the Competitors Cup. After that the team will compete in their conference championships in late April.

Nagy has been near the top of the leaderboard in several events over the last few months, but this event had the two-time Saskatchewan junior’s number. He shot 81 during round one, then rebounded nicely with a 73 in the second round. Nagy’s 10-over par 154 left him in a tie for 64th position. The Colonials placed in a tie for 13th in the team competition.

The Abarta Collegiate Invitational is slated for April 10 and 11 in Hellertown, Pennsylvania for the club’s next event.

Caden Loeppky made his second start of the spring season with Waldorf University in Mount Pleasant, Iowa for the Iowa Wesleyan Invitational at Sheaffer Memorial Golf Course. The Saskatoon born golfer had his best college finish to date landing in 13th position. Loeppky fired back-to-back 77’s for a 36-hole total of 12-over par 154.

The Warriors just missed the podium as a team placing fourth just 15 strokes back of Knox College.

The Triton Invitational is next for the team on April 9 and 10 in Fort Dodge, Iowa.

Cole Jenkins of Prince Albert got his spring season underway this week as well. In a rain shortened tournament in Marion, Iowa Jenkins shot 83 in round one before the event was cancelled.

*Golf Saskatchewan chatted with Jenkins this week to learn more about his start at Southeast Community College in Nebraska. The sophomore will be featured on this website later this week.