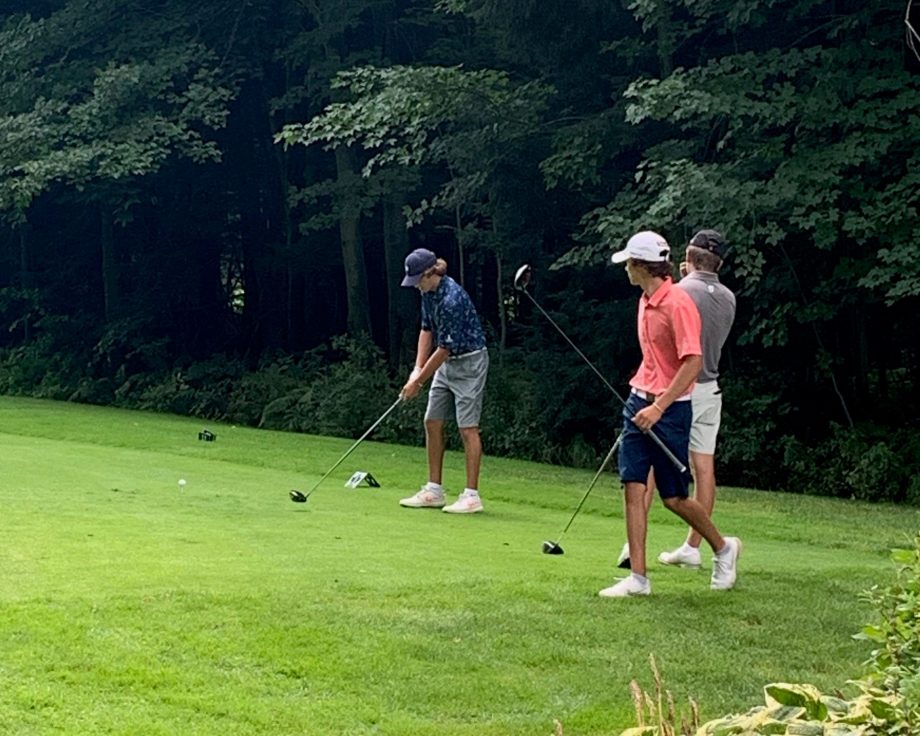 Regina's Will Blake gets set to tee off at the Canadian Junior Boys Championship earlier this month near Montreal.
Clark Stork

For a trio of Saskatchewan junior men, their first taste of nationals was both positive and learning experiences.

Regina’s Will Blake started great at the 72-hole championship at Vallée du Richelieu – Le Club in Sainte-Julie, Québec earlier this month. After round one, the Royal Regina Golf Club member was tied for ninth overall. He said shooting even par, 72 on day one was a real confidence boost.

“Honestly, for me I wasn’t going in thinking I was going to win it, it was my first one,” Blake told Golf Saskatchewan this week. “I wanted to go in and learn from it. I think after the first day being tied for ninth it gave me a wake-up call that I can compete with the best. I didn’t play my best on the first day but was still in the top 10, so it showed all of Saskatchewan kids can compete with the top guys.”

Blake did falter a bit over the final couple days, he shot 80 during round two, 84 in round three, and 81 during the final day to finish at 317, plus-29. Blake finished in 75th spot. He admitted seeing his name that high on the leaderboard was neat.

“It was definitely weird, I was three over after the front nine and I wasn’t too mad,” he explained. “I birdied the first three on the back, I had five birdies on my back nine, that was the third most out of everybody the first day. It was cool. A lot of my buddies have gone in the past years and done well but I’ve never really seen anybody up that high. It was cool; it was an honour. It did go to my head a little bit, but it definitely showed I can compete with the best in Canada.”

Blake currently sits 10th in the Saskatchewan Junior Men’s Order of Merit (OMT) standings with 841.67 points. Despite not picking up any wins he’s happy with how the season has played out.

“I think overall it was good, I’ve had a pretty successful junior career. I think this year was a learning curve that there are definitely some gaps in my game that I must work on. Overall, I have some good finishes, especially at provincials finishing solo fifth, two shots out of first. I think overall it was a good summer, there is some positives and negatives to take out of it,” Blake said.

Tommy Danielson (above, left) of Saskatoon also made his first national event with a couple years of junior eligibility left. The Riverside member was steady though the four days near Montreal shooting three rounds of 78 and an even 72 on the second day to solidify a spot under the cutline. He said his national debut gave him an idea of what to expect at that level.

“It was pretty good; I didn’t play particularly as well as I would have liked to. I had a good experience and hopefully I will get to go back, and I will know what to expect,” he said.

Danielson added that playing all four days was the goal, but he definitely left some shots out there that ballooned his score leaving him in a tie for 49th at the conclusion of the championship.

“Making the cut was great but the last two holes on day three I finished with two doubles, and I doubled the last hole of the tournament, it felt like I lost six shots on three holes. It felt like I zoned out already so I’m kicking myself for that but overall, it was pretty good,” he added.

Danielson is second in the OMT standings sitting just 25 points behind provincial junior champion Hunter Kutcher. Danielson also has a win this year at Moon Lake Golf and Country Club on the Maple Leaf Junior Tour (MJT). He said his season started slowly after some swing changes, but the winter work paid off as the summer moved along.

“It started pretty slow, I was in Florida trying to get some changes, even when I got back there was lots to work on. I started to play better when the changes clicked and the scores got lower,” he said.

Golf Kenosee player and Wawota resident Theoren West placed the highest out of the Saskatchewan contingent. In his final junior Golf Canada event West finished in a tie for 19th at 11-over, 299. He said his goal was met with a finish inside the top-20.

“My goal for the week was top 20 so it is really exciting looking back on it, I’m pretty happy with how I did,” he reflected. “I didn’t start off really well, but I didn’t get down on myself or nothing, I just we’re here, I can’t turn around now. You have to do the best you can do and after that I think I played well.”

He shot 79 on day one but got better as the week went on. West fired a 74 on day two before posting back-to-back 73’s. He climbed 12 spots on the leaderboard during the final day.

“I think the first round I had some nerves on the front nine. I couldn’t get started; it was just one of those rounds nothing was going my way. Through out the week I figured out the greens, I was having trouble reading them. Through the week it got better and better,” he said.

West also has a win on the OMT this year, that was the MJT stop in Estevan at TS&M Woodlawn. He sits in sixth place in the standings. He’s scheduled to play the MJT event at Warman’s Legends Golf Club this weekend and then the MJT Nationals to cap his summer that he calls a successful one.